THE Arrow has brought together some of the quickest straight trackers in training with the inaugural event to be staged on Sunday at Healesville. 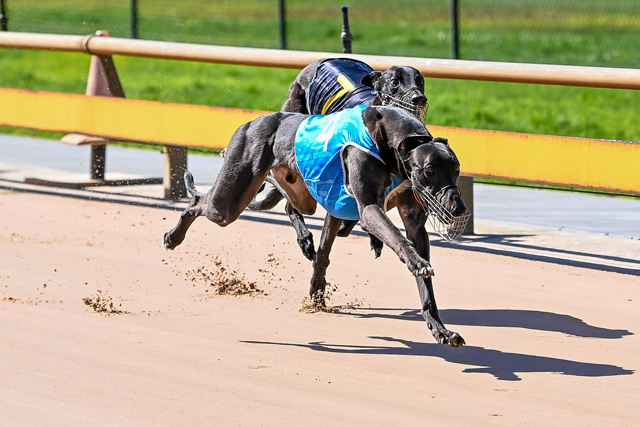 THIS Sunday will see Healesville play host to the inaugural running of The Arrow (350m) which has brought together some of the quickest straight trackers in training.

And successful breeder-owner Charlie Azzopardi is confident that his reigning Healesville Cup (350m) star Zambora Lou can prove himself once again at a feature race level.

Zambora Lou (Zambora Brockie-Zambora Cross) comes up against track specialist Utah Ghost which is unbeaten in three starts at the track over the distance and has a slightly quicker best time of 18.93 than Zambora Lou (18.97).

“I’ve spoken to Jason (trainer Jason Thompson) and he is confident that if he leads, Zambora Lou can win,” Charlie said. “The match race format suits him and the inside draw against Utah Ghost does as well.”

Thompson and Azzopardi have been forced by constant cramping problems to restrict Zambora Lou to sprints.

The 2020 @tabcomau Healesville Cup has gone the way of Zambora Lou for Jason Thompson.

“He hurt a toe when second at Healesville back in July,” Charlie said. “And he was only beaten a length that day.

“But he’s won his two starts since then. Our worry on Sunday is that he missed the start when he won last start at Ballarat. But, he still won.

“He can’t afford to miss the start against Utah Ghost. They will both have to be at their best to win this series. I can tell you we are confident of our dog being hard to beat.”

Zambora Lou has raced 54 times for 24 wins and earned $102,000, and in five starts at Healesville he has won three including last year’s Cup at Group 2 level.

David Geall’s class act Ferdinand Boy goes into the series off three wins and a third in his past four starts at Healesville, including a 19.00 victory two runs back.

He comes up against Jason Thompson’s other The Arrow runner, Mr America (SE Tali Sundance-Model Girl) which makes his debut at Healesville on Sunday.