ASTON Dee Bee’s entry into the stud world has been nothing short of remarkable, churning out record breakers and group 1 winners at a rate of knots.

ASTON Dee Bee’s entry into the stud world has been nothing short of remarkable.

In fact, in just 18 short months, his offspring are nearing 2500 race wins with prize money of almost $7m.

“I was always confident he’d make a name for himself at stud but you could never imagine to this extent. But keeping up with demand has been challenging.” 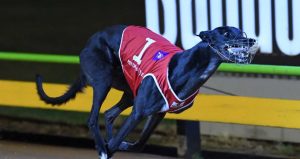 Now 6 ½ years of age, Borda will be adopting a different approach to Aston Dee Bee’s stud work in the foreseeable future.

“We’ll be managing his work load from now and we are keeping him to just AI (artificial insemination) of around six bitches a month,” Borda said.

“I think the process is great. Fresh semen is drawn and the bitch is served there on the spot – it negates freezing, thawing (of semen) and being operated on, but obviously the bitch does need to be on site like we did before frozen semen was possible.”

On site is at Sires On Ice in Victoria with Borda regaling a recent success story.

“Fay Ridis missed on two occasions with Group 1 Bold Trease winner It’s A Bird but recently produced a litter of eight at eight years of age from her to (Aston) Dee Bee through AI,” Borda said.

“Not having to put the bitch under is another positive aspect. For now that will be the only way we’ll be serving bitches with him and keeping it to a workable number each month.”

“I gave plenty of notice last increase and want to do the same again,” Borda said.

“I’m knocking back on average three people a day so this is a way of servicing as many breeders as possible while not overdoing his workload and being mindful of his welfare.”

“That’s the best trait he’s instilling of all – their chase,” Borda said.

“People tell me they’d chase a plastic bag up the street given the opportunity and speaking for my pups that’s spot on.

“This decision is made to ensure he has some longevity at stud and I must say I’m a big fan of the natural elements of the AI process as well.”