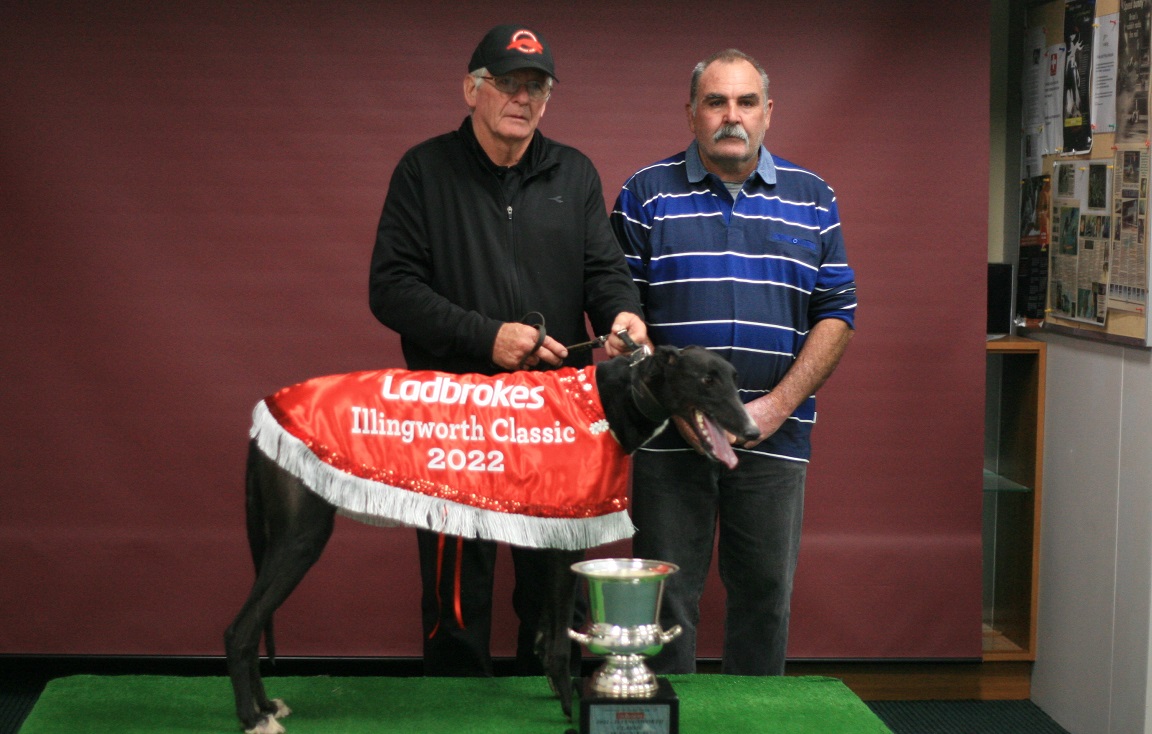 The win followed victories for the Dilston-based conditioner in the event with Dilston Prince and Dilston Diamond.

Sent to the boxes as a $2.90 chance for the thirty-first running of the $16 feature, the son of Aston Dee Bee and Hoity Toity made it five wins from seven starts at the Ladbrokes Racing Centre to score a dominant three length win.

“We had some luck go our way, having come up with box 1 in the final was a massive help,” Neville Allison stated.

“There was going to be plenty of speed in this race and it was a matter for Nail ‘Em Fencer to get out and avoid any trouble, to have his box manners was a huge asset, it’s definitely proven that leaders often win around Launceston.”

Owner Kingsley Jarman celebrated his second Illingworth Classic triumph following on from I’m A Fencer in 2011.

Since its inception back in 1991, the Ladbrokes Illingworth Classic was designed to highlight the best juveniles bred locally just in Tasmania, with Neville first to give praise to breeders Anne and Bill Witherden for their involvement.

“Anne and Bill (Witherden) have done a tremendous job whelping and rearing the entire litter,” the trainer said.

“There were seven pups born from Hoity Toity and they’ve all won races now (44 winners and $155,503 in stakes) and have also produced two classic winners as well which is a great achievement to showcase our breeding industry.”

Neville says winning the Illingworth Classic is a thrill with the event named in honour of Ollie and Des Illingworth.

Dark Titan goes all the way in Paul Bullock Cup

A brilliant front-running performance paved the way for top stayer Dark Titan to capture his second feature race win by taking out the inaugural $3,475 to-the-winner Paul Bullock Cup over 600 metres in Launceston on Monday night.

Starting from box 1 as the $1.45 favourite, Dark Titan used the inside draw to his utmost advantage securing a rails run over the challenger Dewana Milo and striding out on his way to lead all the way to bring up his twelfth race win.

Making it two from two over the 600m trip the son of Bella Infrared scored by 3-3/4 lengths defeating Dewana Milo.

Owner Ian Sowell and Mangalore-based trainer Debbie Cannan have raced the black chaser together all through his 42 career starts highlighted by his maiden feature win last year in the Tasmanian Derby Final producing a top effort.

Debbie Cannan says a lack of support in staying class races has forced her to keep Dark Titan over the sprint journey.

“Dark Titan is a genuine stayer and he has proven that the longer distances are his forte, with no staying races here for his grade it really left us with no choice but to keep him over the sprints, he used the inside draw well,” she said.

“I’m really thrilled for Ian Sowell (owner) who invests plenty into his dogs and it’s great to see him get the rewards.”

Dark Titan will make the short back-up to race in Hobart on Thursday night contesting an invitation class event over the 461-metres and will jump from box 3 up against his well-inform kennel mates in Jewel Titan and Run Red Run.