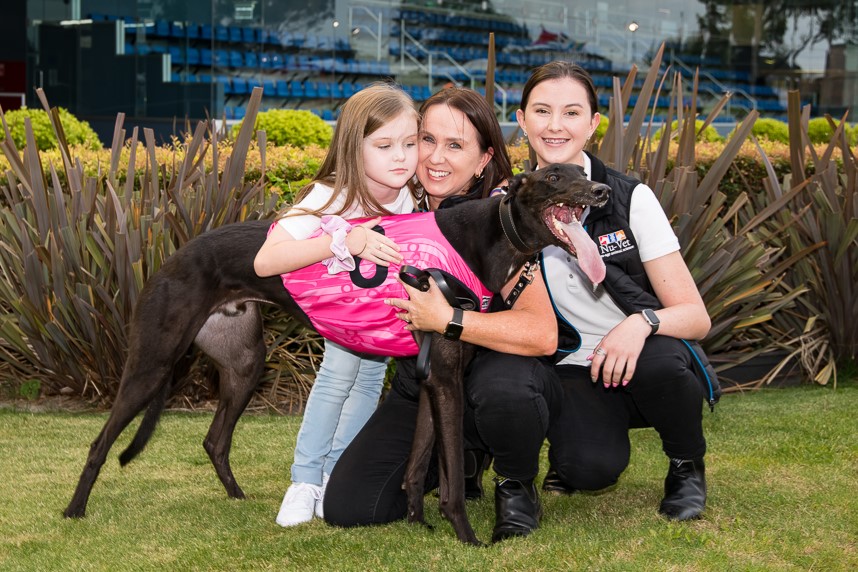 A litter brother to 2021 TAB Melbourne Cup favourite Aston Rupee, Aston Fastnet stepped cleanly from box eight and mustered pace strongly to assume the lead past the post the first time and power to a seven length victory.

It was the third fastest ever win by a grade six greyhound and the fastest time ever recorded in the opening race of a card.

“Very happy. To come out and run that time in the first race of the night is very special,” said Seona Thompson.

“When the box draw come out and I saw he had box eight – box eight at Sandown isn’t our favourite box – I was hoping that he would have enough pace to clear them.

“He didn’t fly out but he did enough to get across going past the winning post the first time and once he was in front I knew that he was going to carve out a fast time.”

Trained by Seona’s husband Jason, the Thompsons had to be patient with their star prospect.

Making his debut in November 2020, he was placed just once in his first three starts – beaten by a cumulative 20 lengths – before spending almost three lengths on the side lines.

“He had a couple of starts early and wasn’t really putting it together. He had a couple of niggling injuries so we gave him a spell and since he’s come back to the race kennel he’s a different dog, he’s really grown up and is starting to put the racing thing together.

“He went super at Ballarat last start (winning in 24.78) and obviously to get him here over 515m was the aim and he showed that he can definitely match it in the big races to come.”

The obvious target for Aston Fastnet is the Launching Pad, a slot race series for greyhounds with 1-6 wins and no more than 30 starts, the heats of which will be run next Thursday.

However Thompson was not willing to commit him to the $420,000 series just yet.

“I know Ray (Borda, owner) has a couple of tickets and we have one. There’s some big races in Sydney coming up so I do know that Jason is going to split some of the younger dogs.

“I don’t know which are going where, I’m not sure he’s decided yet. But when the dog has come out and run that time tonight it’s going to be hard not to come back next week.”

It was a big night for leviathan South Australian owner Ray Borda, who completed a race to race double with Aston Lavinia – also Launching Pad eligible – scoring in 29.31 for Jessica Sharp.

“He puts a lot of money and time and effort into the dogs and he deserves every fast dog he gets.”

Later in the night Destruction secured his Launching Pad ticket via a determined victory in the Launching Pad qualifier, running 29.68 to win for the fourth time in five starts.