23 race starts is generally not enough time to get a genuine guide on the potential of a dog for stud duty ... unless that dog is Aston Kimetto. 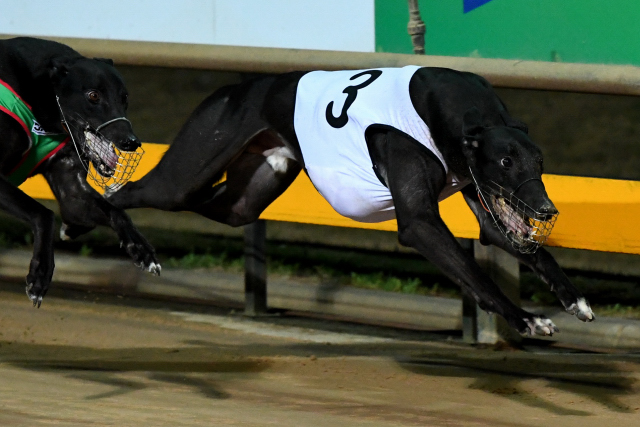 TWENTY three race starts is generally not enough time to get a genuine guide on the potential of a dog for stud duty … unless that dog is Aston Kimetto.

The racing blueblood established for himself a reputation as one of the very best of his time.

He was literally sensational.

Along the way, the Ray Borda-owned and Seona and Jason Thompson-trained star landed the Group 2 Geelong cup, Group 2 Ballarat Cup, and those who witnessed his last-to-first victory in the Group 3 Warragul St Leger are still talking about it … defeating the likes of My Redeemer, Pindari Express and Black Forge.

He was also a finalist in the Group 3 SA Derby and Group 3 Sandown Shootout.

Few, if any, can doubt his racetrack credentials. That St Leger victory is as impressive a performance as there is and stamped him stud dog material the way he swept past a hot field of youngsters.

Aston Kimetto was bred to be a wonder.

By US stud great KC And All (Gable Dodge-KC Did It Best), he is out of that immortal race bitch Sweet It Is (Mogambo-Off Springer) who raced in an era where his greatest rivals included the legends Xylia Allen, Destini Fireball and Space Star, as well as such staying stars as Lady Toy, Luna Jinx, Dyna Willow, Rocky Bale, Born Ali etc.

Any one of those would have made her a great stayer, let alone all six.

And, she ran a Wentworth Park track record to boot.

And, she soon followed up with great success at stud.

But, it is to KC And All that she has excelled.

Broodbitch owners are a picky bunch and one of the criteria they want a stud dog to boast is that he comes from a fabulous litter.

Often Imitated has won the G2 McKenna Memorial and been a finalist in the G2 Laurels and G3 SA Oaks.

While Aston Kimetto is Aussie bred, he carries a great reinforcement of US bloodlines via his sire KC And All and Flying Penske (damsire of Sweet It Is).

KC And All is line bred 3×3 to Dutch Bahama who is saturated with Aussie bloodlines.

So, how does Aston Kimetto’s blood help him succeed at stud?

First, his mother Sweet It Is just happens to be a half sister to Banjo Boy, the G2 Cranbourne Cup winner by speed sire Vee Man Vane, who has since gone to stud to prove himself a success.

Big Flood (3rd G1 Easter Egg) and his classy litter sister Brueghelino, are out of a daughter of El Grand Senor.

Banjo Boy’s multiple Oaks winning daughter Zoom Out is out of a daughter of Dyna Tron.

Both of these litters have Primo Uno as the sire of their second dam.

Banjo Boy’s multiple Group placed Flossing is out of a daughter of Magic Sprite.

That fabulous South Australian-bred litter by Banjo Boy that included High Eden Frost (3rd G1 Adelaide Cup) are out of a daughter of Kinloch Brae.

The classy Group performers Banjo Tifia and Rev Fred Sloy both have the Bombastic Shiraz-Chili Berger influence in their dams.

Over in WA, Banjo Boy’s dog Winlock Banking is in-bred 2×2 to half sisters Off Springer and Miss Bling.

All of these aspects will help Aston Kimetto succeed.

Mogambo, damsire of Aston Kimetto, is a brother to Flamenco the dam of G1 star and successful sire My Bro Fabio.

Yes, Fabio is a son of Turanza Bale who just happens to have produced Sweet It Is’ first litter that included Group galloper Aston It Is.

Bitches with Turanza Bale will be a natural for Aston Kimetto.

The Wheeler-bred Turanza Bale is a son of Primo Uno who is found in a number of the best progeny sired by Banjo Boy.

Primo Uno can be picked up for matings to Aston Kimetto through Fernando Bale of course, and in the future Worm Burner and Buckle Up Wes, as well as Kilty Lad.

The Sweet It Is direct damline traces to the famed Waroo Lass, the same damline as Bombastic Shiraz, Magic Sprite and Oaks Road. It is the damline of legend National Lass.

Bitches by Stagger will be an interesting mate for Aston Kimetto. Stagger is by Primo Uno and has a cross of National Lass’ son Denver in his direct damline.

Mogambo (damsire of Aston Kimetto) has also done extremely well when linked to Collision. He is everywhere in pedigrees of today.

The Flying Penske cross in Aston Kimetto’s damline of course means he can link up with similarly bred Kiowa Sweet Trey a most proven cross in the US.

Kiowa Sweet Trey, too, is everywhere in Aussie bloodlines. And he is found in the damline of Zambora Brockie.

Aston Kimetto was a very, very fast Group winner on the track, is royally bred and has a proven stud dog in his immediate family.

He’s certainly got what it takes to make a success at stud.

Cup Spot Up For Grabs In SA Match Race Clash