ASTON Rupee claimed the second Speed Star title of his spiraling career with a dynamite performance at The Meadows on Wednesday evening. 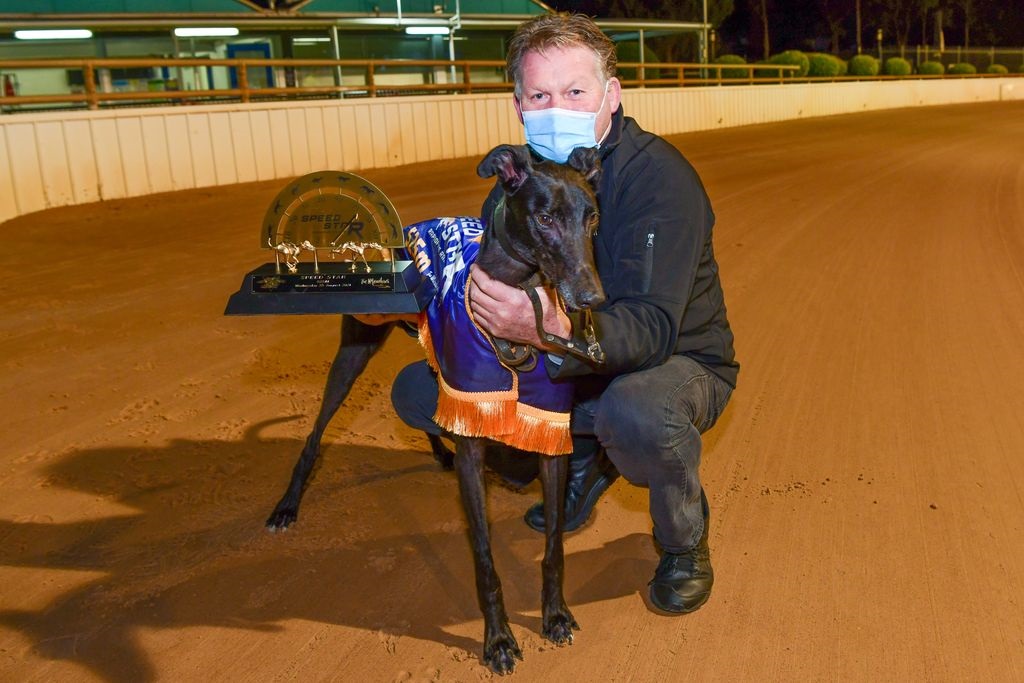 ASTON Rupee claimed the second Speed Star title of his spiraling career with a dynamite performance at The Meadows on Wednesday evening.

The regally bred son of Kc And All and Aston Miley recorded a flying 29.59 to defeat a gallant Weblec Blazer by three lengths and in doing so secure the $20,000 first prize.

The victory was the Glenn Rounds-trained star’s second Group 3 Speed Star title, annexing the event back in June at Sandown Park with a scintillating 29.06 winning effort.

In speaking to Sky Racing’s Gareth Hall post-race, Rounds couldn’t hide his admiration for his gifted chaser which now boasts 12 wins from 24 starts and $160,720 in prize money.

Even in slow motion Aston Rupee is a fast animal! He beats the fastest qualifier to jump up into 1st position on the 525m #SpeedStar leaderboard! pic.twitter.com/BvtHrnBui6

“He’s just beautiful to watch – he was nice and smooth in his action and did the job well,” Rounds said.

“We’ve been consistent with him and he’s got into a pattern which seems to have worked with him. There’s some big things ahead for the dog so the next few months will be the most important of his young career.

“I’m rapped with his performance tonight.”

Collinda Patty shot to the top of rankings for the series with a sublime 34.12 solo-trial last Saturday for Jason Thompson but it was her gritty 34.37 performance on Wednesday that landed the daughter of Zambora Brockie Group 3 honours.

Collinda Patty continues her dominance over the middle distance in the 600m #SpeedStar event tonight for the powerful Thompson kennel!

Mepunga Warrior filled second place with his 34.41 match-race win over Gypsy Wyong while Zac’s Entity filled third with his closing second to Collinda Patty, suggesting it’s only a matter of time until we see him over even longer.

The 725m Speed Star saw the very in-form Mepunga Ruby start an even money favourite and she didn’t let backers down, reeling off 42.59 for trainer Jeff Britton in the opening match-race.

Mepunga Ruby stamps her authority in the first match race of the night winning in 42.595 from Major Sacrifice!

Can she hold on and win the overall event? pic.twitter.com/ytdULSOD8y

Making every post a winner over the staying ranks, Mepunga Ruby defeated Hank The Hustler by 2 ¾ lengths in overall proceedings to hand Jeff Britton the quinella in the Group 3 feature.