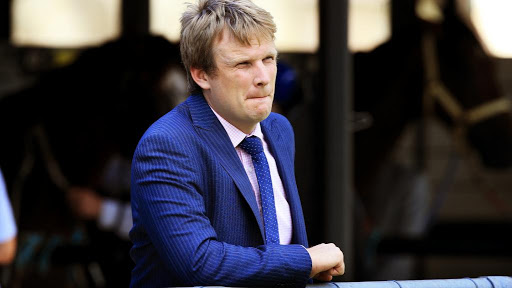 On Tuesday at Addington, Baker and his fellow syndicate members were on top of the world after It’s A Blaze stormed to a track record breaking victory in a dazzling 29.42.

That was followed on Wednesday night by Bandit Ned’s win in the Group 3 Magic Maiden Final (520m) at Wentworth Park – the son of Fernando Bale going through the three-week $25,000-to-the-winner series undefeated.

The syndicate that races the star duo was formed by Greyhounds HQ’s Joe Lanutti and includes another prominent owner, Topsport’s Tristan Merlehan.

“We were at lunch one day and Joe said with It’s A Blaze we could be buying the fastest greyhound in the world and he just may be right.

“In a lot of ways it’s not too dissimilar to what I do with the thoroughbreds but at least I have jockeys to blame – with the greyhounds it’s all on the trainers.”

After launching his career in Australia, It’s A Blaze broke the Cranbourne 520 metre track record at just his second start, running a blinding 29.54.

But after catching the ire of stewards a few starts later connections made the decision to sell the immensely talented yet erratic chaser, with New Zealand the logical destination given its penchant for getting problem greyhounds back on track via the finish on lure.

“When I got the group together I said it would likely go one of two ways – very good or very bad,” Lanutti said.

“Touchwood he hasn’t looked like putting a foot wrong and the boys are going to have a lot of fun it seems. We are getting a great kick out of it all.”

The early success being enjoyed by the syndicate only escalated on Wednesday night with Bandit Ned’s 30.07 Magic Maiden success – collecting a cool $25,000 for connections.

Trained by Andy Lord, who still maintains a majority share, Bandit Ned finished with a rush to defeat Cowgirl Ethics by a length with Irinka Molly third another 2 ¼ lengths away.

The group race victory handing an already excited group of owners a 24 hours to remember.

“With my early starts it makes getting out to the greyhounds almost impossible,” Baker said.

“But the last few days have been very exciting and hopefully it’s the start of more to come. I’ve got some stable clients that are right into the dogs so it’s great to have an involvement.

“I just wish I had as good a strike-rate with my horses as I do with the dogs at the moment!”