TRAINER Ashlee Terry has spent more time at Des Fegan’s Veterinary Clinic in the past 12 months with Big Reputation than she cares to remember. 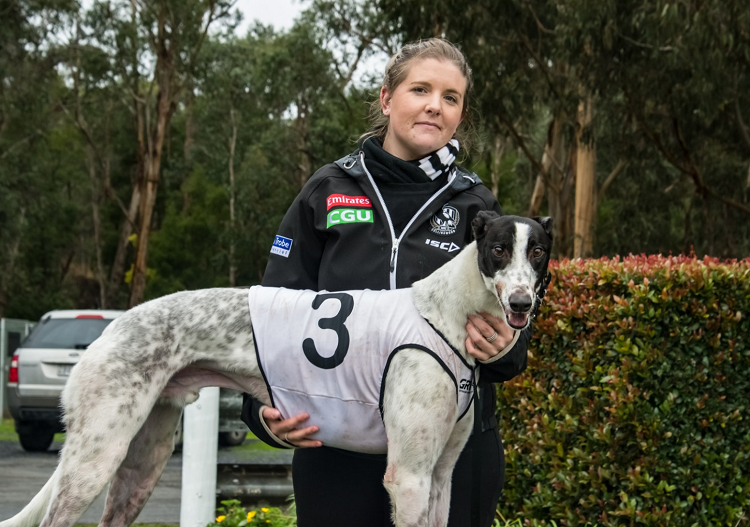 ASHLEE Terry has spent more time at Des Fegan’s Cranbourne Veterinary Clinic in the past 12 months with her unbeaten sprinter Big Reputation than she cares to remember.

“It got to the point that when we’d walk in Des would say what’s gone wrong with him this time? That’s how often we were there,” reflected Terry.

Last Friday at Healesville, after over 400 days since his last race appearance, Big Reputation made a winning return to the track for a much relieved and equally proud Terry, extending his unbeaten record to five.

“It’s been a long 13 months, to have him back racing in one piece after what he’s overcome means a lot to me but even more so the dog … he just loves to race,” said a proud Terry on Tuesday.

Way back in May 2018, the flashy two-year old white and black sprinter created a huge impression winning the Shepparton Vic Breeders Maiden Series (450m), sweeping through the three-week event undefeated in sizzling fashion.

To watch him was to understand that he was a star on the rise, the wet behind the ears youngster demonstrating unbridled ability.

“He broke in at McNamaras with big raps – he went 17.69 with a 12.04 run home time so he showed how good he was right from the start,” reflected Terry.

“When I started trialling him on race tracks he was running times good race dogs were running as a pup … leading into the Shepparton Vic Breeders he trialled 21.80 over the 390 there and really went into the 450m series underdone for where he was at. He could just do things other dogs couldn’t.”

Following four brilliant victories to launch his career, three in the Shepparton Vic Breeders and another at Warragul, the son of Dyna Double One and Sweet Julia’s career hit the skids, with Terry encountering a sustained stretch of career threatening injuries with her blossoming star.

“He did a stopper tendon which needed surgery … it’s generally 3-4 months if they do come back from it,” explained Terry.

After months of recovery and rehabilitation, Terry’s worst fears were realised when the talented conveyance injured the other stopper tendon, requiring Fegan to perform a second surgery.

“After that happened you kind of start thinking the worst … I took all of Des’s advice and it was another long recuperation but he was confident he could still come back to race … even if he wasn’t going to be the dog he was going to be.”

In March this year, some 10 months following his debut Shepparton appearance, Terry headed to Healesville with Big Reputation, trialling in readiness for a much anticipated race track return.

“After everything he’d been through I was pretty nervous but he trialled very quick and everything seemed to be fine when he pulled up,” said Terry.

“That night when we got home it was about 7pm and I heard a scream from up in the kennels and it was him … the first thing I did was check the stopper tendon he’d had the operation on but it seemed fine. When I looked at the other (stopper) I could see he’d done damage to that.”

“It had blown up really bad and it was then that I started to think that it’s probably it for his racing – it was actually worse than the damage he’d done to the other stopper the last time,” said Terry.

“Des’s advice was to operate, explaining he wouldn’t be the dog he was, but he could still likely race. After so many problems you just start to expect the worst, at the time I even had his vaccinations done for re-homing.”

Last Friday at Healesville however, 13 months of setbacks were washed aside, with Big Reputation scoring in the last event of the day by five lengths in 16.77 – the best of the day to boot.

“There was an accident on the way to the track on Friday and I didn’t know if we were even going to make it at one stage,” said Terry.

“When we got to the track he jumped straight onto the vets table and wagged his tail the whole way to the boxes … he barked the whole way in the car as well – he was just happy to be back racing. So was I.

“I’m content now that I know he’s never going to reach the heights he was going to and that’s fine. I’m just happy to have him back racing and doing what he loves after everything he’s been through. It says a lot for the dog to still be going as hard as he is in races after all that.”

Picked out by his trainer as a two-day old pup, Terry is also prepared for the day her star charge’s winning sequence comes to a halt.

“He’s never been beaten in a trial or a race – I’m not sure he’d know what to do if he was,” said Terry tongue in cheek.

“I know that’ll change at some stage … for now I’ll just keep him up the straight until he’s out-graded and let him work his way back slowly.

“Hopefully his injuries and bad luck are behind him now. He’s a very special dog.”