THE three greyhound race meetings slated for New South Wales on Wednesday have all been abandoned with more set to follow. 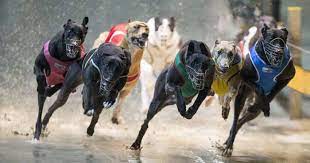 THE three greyhound race meetings slated for New South Wales on Wednesday have all been abandoned.

Meetings at Wentworth Park, Grafton and Richmond (straight track) have all fallen victim to the big wet which is hitting most parts of New South Wales.

As well as the three meeting abandonments on Wednesday, Thursday’s card at Casino has also been called off at a time where the Northern Rivers region is suffering through unprecedented flood damage.

With further heavy rain forecast for the greater Sydney region in the coming days it’s anticipated more meetings are likely to go by the wayside in coming days.

Sydney has been swamped with rain during the past eight days.

More than 300mm has been recorded in western Sydney with the forecast of more to follow.

The expected ‘rain bomb’ predicted for the greater Sydney region on Wednesday has been delayed.

A Bureau of Meteorology official told Sky News on Wednesday that the rain system stalled overnight and it’s now expected to reach Sydney on Wednesday night and into Thursday.