DAWN Fraser won a gold medal in the 100m freestyle at the 1956 Olympics in a world record 1.02 minutes, before winning again in Rome and Tokyo. 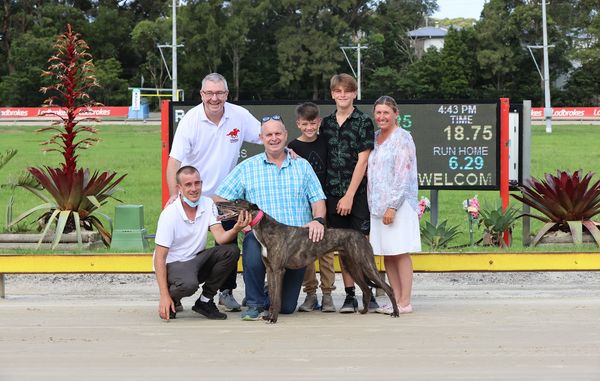 The same parallel is seen in greyhound racing with Bulli now producing times – over all distances – which once seemed unapproachable.

It was an exciting 16 mins or so at Bulli yesterday, with Boaz smashing the 340m track record, clocking 18.75s and Trunkey Bill following it up in the very next race, breaking the 590m record, running 32.95s!

“There’s no doubt he’s the quickest dog I’ve trained and he really showed that from day one,” the Bargo-based mentor said.

“He won his first four starts at Bathurst and Richmond in quick times and we gave him three trials at Wentworth Park (over 520m) but, after fast sections, his times were in the 30.20 mark and we decided to come back in trip.”

A hip support injury then sidelined the dark brindle son of Fernando Bale for 13 weeks and his Bulli record – win nine – was registered at only his fourteenth start.

“The win two starts back was amazing as he was a little underdone fitness wise,” Brewer added.

“He was three-wide at the first turn and then badly checked but he stuck to the task to win in the last stride – to be honest I really thought he finished second but the Bulli ‘angle’ is tricky.

“We trial at Bulli a lot and the track is in terrific order. The new watering system seems to be working really well and, maybe, that’s why times have come down so quickly.”

Adding depth to Boaz’s record breaking run was that the classy On The Rocks (20 wins from 37 starts and a 2020 Group 2 Laurels Finalist at the Sandown) filled the quinella position.

Brewer’s attention has been on the Group Race Calendar with Boaz in mind but there’s little on offer for the lightly raced three year old.

“Something at Bendigo over 425m, for example, would be ideal but it’s a long way to go and it’s just got to be worth going for,” he mused.

In just a matter of weeks, the best sprinters in the land will head to Bulli for the Group 2 Bulli Gold Cup (472m) and, given perfect racing conditions, the record books will be again readied for amendment.