Bookends No Blessing For Camilleri In Super Stayers

DRAWING the bookends in a group 1 final would normally be cause for celebration but that's not the case in Saturday's Group 1 Super Stayers. 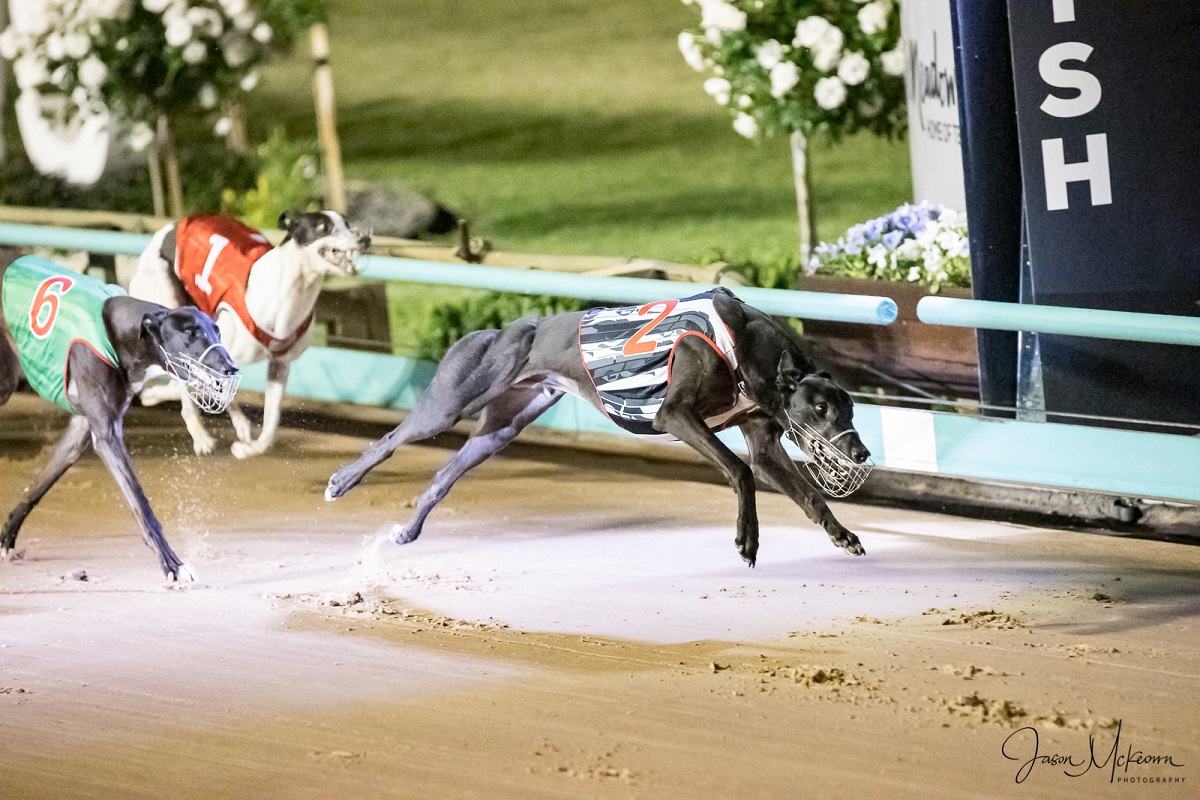 DRAWING the bookends in a Group 1 final would normally be cause for celebration.

But for Lara trainer Rob Camilleri, it is far from ideal for his two runners in Saturday night’s Fanta Bale Super Stayers at The Meadows.

Overflow Lisa (1) and Beck’s Monelli (8) qualified for the $100,000 to the winner group 1 after each ran second in their respective heats, both jumping from box 1.

Overflow Lisa was the best away in her heat before drifting wide around the first turn. Dropping to fourth after a lap, the daughter of the enigmatic Rippin’ Sam then finished strongly to close to within three lengths of series favourite Mepunga Ruby.

While Camilleri would rather swap her red vest for a pink vest in the final, he believes that at $6.50 with TAB is a good each way chance.

“What she does is that if dogs get out with her on her outside, she eases out of it to get around them. While she’s going backwards all the others are going forward which is why she’s giving them a big start all the time.

“But last Saturday, when she began there was nothing on her outside she ran a good race. She pulled up super and this week she’s going to be a little bit better.

“If she gets a clear run for the first 100m, she’s worth an each-way ticket. She’ll run the time easily with a clear run and if there were 900m races she’d be a moral – she just needs a bit of luck in running.”

His second runner, Becks Monelli, is the rank outsider of the field and Camilleri is expecting sharp improvement from the former Western Australian in what will be her sixth start in Victoria.

Champion SA stayer Sir Truculent has made it through to another Group 1 Final for trainer Wally Harkins after finishing 2nd in his heat of the Group 1 Fanta Bale Super Stayers at @themeadowsgreys on Saturday night.

Good luck to all connections in the final on Saturday night. pic.twitter.com/C6rIeAGgls

“That was her first 700m here (in Victoria), it was like a trial and she went great. We expect her to go better this week, barring interference of course.

“Dogs coming from interstate need to get used to the Vic tempo, especially to the first mark. In her first couple of starts here she was all over the shop, but after a couple of runs she started to learn. At Sandown over 595m two starts ago) she ran a really good race. I said to the owner that she is getting used to the tempo, she’ll improve now.

“She’s a natural stayer. She’s going to struggle if she can’t get across, but I’m praying that she can come out a bit better and she can get a drag across with the 5 she can make the whole race very interesting.”

The Fanta Bale Super Stayers will be run on Australian Cup night at the Meadows on Saturday night.

Australian Cup night is one of the country’s premier nights of racing – and not just because of the feature event.

While the group 1 finals – the $450,000 Australia Cup (race 8) and the $150,000 Fanta Bale Super Stayers (race 6) – rightly headline the card, a total of seven feature events will be conducted for greyhounds at all stages of their careers. While the group 1 winners will deservedly earn the plaudits, there’s plenty of interest in the undercard – both on Saturday night and into the future.

Here’s a look at each of the support features, how the runners got there, and what to watch for.

Open to Victorian bred grade 5 greyhounds, the finalists qualified via heats run at the Meadows on Wednesday 16 February. While Lalina claimed the prize in 2021, it was David Geall pair Fernando Mick (2nd) and Hill Top Jack (5th) who would go on to country cup success.

What to watch for: Bearish (2) and Aston Tango (4) ran near identical first splits and winning times in their heats at and are both ready to establish themselves as city class sprinters.

As you’d expect from a maiden series carrying a $25,000 first prize, breeding aficionados salivate at the racing talent on show with a field comprised of some the best bred youngsters you’ll see.

What to watch for: Superbly bred duo Hometown Hero (2) and Deadly Class (7) have been flawless in their respective heats and semi-finals and are likely to dominate betting. Expect sharp improvement from Plaintiff which has the red after drawing the carpark in both his heat and semi-final. Expect Rapaki Rocks (3) flash home late and black book him for staying races later in 2022.

Open to greyhounds with no city wins and qualifying via heats conducted at Shepparton, Warrnambool, Ballarat and Warragul. It’s this race that in 2021 saw the emergence of Aston Rupee who won in 29.47 – the third fastest time ever run at the Meadows – and announce himself as a once in a generation prospect.

What to watch for: Lining up the form can be tricky given they have qualified at four different one turn venues over 450m/460m. Aston Merit (4) and Mepunga Mustang (5) are two well-bred young greyhounds with a better than 50% strike rate entering this series with best of night heat wins.

As is often the case on a Cup night at The Meadows or Sandown, the best 8 over the middle distance is one of the highest quality races on the card and a fitting way to kick off the quaddie. Speed and strength from top to bottom, the field has combined to have won almost $2m in prize money.

What to watch for: Jarick Bale (1) is the only runner not to have competed in the heats of either the Australian Cup or Fanta Bale Super Stayers (or raced elsewhere in the case of Aston Ulysses) having been saved for this following his group 1 Rookie Rebel win. Will give the 34 second barrier a nudge from box 1.

For the greyhounds that ran second in the Australian Cup heats, an entrée for the main event in race 8.

What to watch for: Aston Rupee. After having no luck in his heat last week, he won’t need any luck here after drawing box 1 for just the second time in 26 starts and the third time in his career. He broke 29 seconds at Sandown the last time he drew red – 29.376 is the mark to keep an eye on.