Box One Should See Telfer Salute At Launceston

TELFER looks poised for victory at Launceston tonight, the talented son of Fabregas installed a $2.00 favourite for race three over the 515 metres. 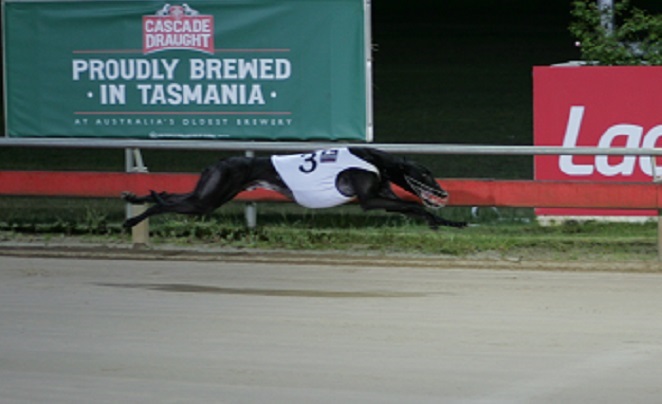 THE Mick Louth-trained Telfer looks poised for victory at Launceston this Monday night with bookmakers agreeing, installing the son of Fabregas a $2.00 favourite for race three over the 515 metres.

Last Monday Telfer finished a very creditable 2 ½ length third to Wynburn Lethal in the Puppy Championship Final (515m), a performance that suggested the promising juvenile was on the cusp of returning to the winner’s list.

“From box one he’s capable of breaking 30 seconds,” Louth declared.

Telfer has now had six starts at the Launceston 515 metres for four placings, his best time recorded in those efforts a tidy 30.10.

“His litter is going good but I’d say he’s probably the quickest if you pushed me,” Louth added.

Betting suggests Telfer’s biggest danger on Monday night is the Butch Deverell-trained Inner Circle, the son of Barcia Bale finishing an eye-catching fourth in last week’s Puppy Championship behind Wynburn Lethal, and just a length behind Telfer at the line.

Chasing his first career win at start five, Inner Circle is quoted a $3.70 chance with bookies early doors, while the other chance as far as betting is concerned is the Robin Grubb-trained Sir Rogan, taking his place off a smart last start 25.93 Devonport win.

Hello Rhonda, winner at eight of her 12 Launceston 515 metre starts, returns to the trip after finishing midfield in a 278-metre assignment last week, while Be Like Bill takes his place in the field off some slashing placings behind Stanley Gordon and Stop Line.

Making for a great betting meeting, early markets see just the one odds-on favourite on the 10-event card, rolling around in race nine in Rivergum Chief.

Not seen since May when a slick 25.61 Devonport winner, the four-time winner has ran fast time at Launceston and looks poised to make a winning return on Monday night from box two.