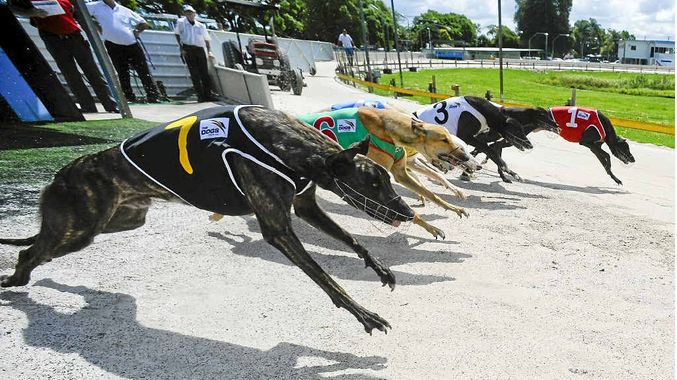 “He’s just kept improving from the moment he got here but don’t worry his brother Zipping Red is just as good, his run in the final (finishing fourth) was the equal of the winner,” Tyler said.

Going into Friday night’s $10,000 to-the-winner final as the $2.70 favourite, Zipping Brady made full use of what looked like an ideal box two draw, scooting away down the back before scoring by five lengths in 30.65.

Runner-up was a gallant Aristocrat for Geoff Curtale while third was Memories One for John Callaughan.

All things being equal, Zipping Brady will head towards Wentworth Park, while a tilt at the fast approaching Soldiers Saddle at Bathurst isn’t totally out of the question either.

“He’s trialled fast at Wentworth Park already so getting him some good experience there is the focus but Bathurst isn’t off the table either,” Tyler added.

And while Tyler was overjoyed with Zipping Brady’s maiden heroics on Friday night he was equally proud of Lochinvar Dynamo’s return to racing clearance trial before the first.

Off the scene for over seven months recuperating from a broken hock, the son of Magic Sprite recorded a slick 18.60 for the 330 metres with a 13.99 run home.

“It’s been a long, tough process, I’m so proud of him, Tyler beamed.

“When he first got here I had to carry him out to the empty yards so to see him run that sort of time on Friday was very rewarding.”

Already boasting the Richmond 330 metre track record on her resume at 18.36, the daughter of El Grand Senor made it win 21 from 34 at Ladbrokes Gardens on Friday when setting the new benchmark.

The final field comprises four Victorian and four NSW dogs, with Monday’s box draw expected to play a significant part in how the final plays out.

GRNSW’s investment in middle distance racing is to be commended, and with the strength of Thursday’s final, one would expect it will only strengthen the peak body’s resolve in boosting the middle distance ranks in NSW.

TRAINER Dave Irwin says he’ll adopt the slow and steady approach with That’s Lil Vicki after the daughter of Dyna Double One’s near record run at Casino on Friday.

Having her first start since July, the hugely talented chaser was a noted drifter in betting but any concerns her followers had were quickly dispelled, spearing out for a 9 ¼ length victory in 27.16.

“She’s been a bit unlucky with records; she’s gone outside a few of them now,” Irwin said of the Lismore 635 metre record holder.

“The plan is to take her along slow, she’s been off for a while so I don’t want to push her.”

A slick 30.05 heat winner, a world away from the 29.55 recorded by race favourite Zipping Cia, Rattlin’ Home, a daughter of Tomac Bale, defeated Lucy’s Quest by a length in Saturday’s finale, posting 30.49.

As well as the $5,500 first prize, Mitchell also takes home the Beast Unleashed service at a time the prodigious talent begins to really catch the eye of breeders.

LOOK for Ella Enchanted to play a strong hand in Friday night’s Group 1 Bold Trease heats after her terrific return to racing at Sandown on Sunday for Jamie Ennis.

Lining up for the first time since finishing second to Tornado Tears in the Superstayers Invitation at Albion Park in June, trainer Jamie Ennis told the Recorder recently that the Bold Trease has been the long range plan with Ella Enchanted.

On Sunday, she ticked the first box off for that audacious group 1 bid, getting home hard to record 34.26 over the 595 metres.

WHEELER bred sires were responsible for 10 of the 12 winners’ at The Meadows on Saturday night.

As usual, Fernando Bale and Barcia Bale were front and centre, while Topgun winner David Bale and The Meadows record holder Allen Deeds played their part as well in the huge haul.