LUCKIE Karabitsakos reckons he "got lucky" when he called Queensland breeder Brent Kline in his desperate search for a Hard Style Rico pup.

LUCKIE Karabitsakos reckons he “got lucky” when he rang Queenslander Brent Kline in a desperate search for a Hard Style Rico pup.

But Luckie was faced with a problem.

“Most of my bitches are from the same family as Rico himself and I wanted to get some pups by him,” he said. “I rang Brent in Queensland who put a very nice race bitch called Ryall to him. I bought one of the pups.”

That now seven month old fawn dog holds pride of place at Luckie’s property being reared with a litter of Fabregas pups from Rico’s damline.

“He’s magnificent and from the same damline as that great Queensland bitch Cyndie’s Magic and we all know what a great line that is up in Queensland,” said Luckie.

“The pup is very keen and that’s what we are hearing from everyone with his pups. All reports are that they are very forward pups. Anthony Azzopardi sent me a video of a four month old puppy by Rico he is rearing and we put it on Rico’s Facebook page.

On this day last year Hard Style Rico dominated the @RSN927 Silver Bullet @TheMeadowsDogs – it was a sign of things to come, a record breaking TAB #MelbourneCup win!

“It’s a great advertisement for him.”

Luckie is overjoyed with the response to Hard Style Rico from breeders.

“Plenty of very good quality race bitches and broodbitches have gone to him,” he said.

“I was especially happy the Wheeler family put Lila Bale to him, but they are not the only leading breeders using him.

“And, we’ve had lots of response from breeders in NSW and Queensland as well. Just lately the phone has been ringing from interstate as the weather warms up and bitches are coming on season.

Luckie has gone out of his way to get bitches for himself to put to Rico.

“I’ve got a sister to Whiskey Riot and Fernando’s Riot called Chill Easy who will go to him when she comes on,” he said.

“And I recently bought a nice bitch called Sweet Emotion whose mother is a half sister to Aston Dee Bee and the dam of Aston Rupee. 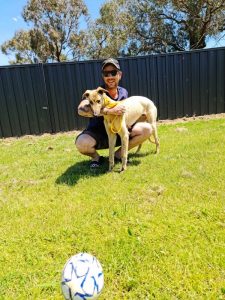 “Have a look at that cross with Rico, it will blow your mind.”

Luckie says the forward nature of the Rico offspring, the oldest of which are eight months, has been mentioned often by breeders.

“The Barcia Bale and Fabregas pups are well known for being so forward when being reared,” said Luckie. “I’m hearing reports from Rico pup owners that they are all the same.

“It looks good for his future success.”