STRATHEDEN dog man Allan Lang can come up with a name for his greyhounds and his latest star, Cataclysmic, is just another example. 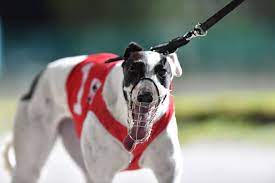 STRATHEDEN dog man Allan Lang can come up with a name for his greyhounds and his latest star, Cataclysmic, is just another example.

“We were visiting our daughter in Airlie Beach and our grandson was talking about the destruction of dinosaurs being a cataclysmic event,” said Lang.

“I reckoned that sounded like a great name for a dog.”

“I don’t know how good he is yet, but he keeps winning,” said Lang of Cataclysmic.

“He goes into a final next week and then I will look to step him up to 480 metres and eventually try him at 520 metres.”

Lang has only four dogs in work and one of those is Cataclysmic’s litter sister Pinch A Banana the winner of three of her four starts.

He reports he is unaware of any semen still available for his great sprinter and much underrated stud dog Paw Licking the sire in recent times of 2021 Queensland Greyhound of the Year Spotted Elk and her star litter sister Extra Malt, as well as the Group star Wise Misty.

“There might be a few people with straws stored, but I don’t know of any,” he said. “I’ve had a few people ask me about using him.”

Paw Licking is the sire of the winners of $6 million.

“He suffered by going to stud right at the time of the NSW ban on the industry, but also when dogs like Fernando Bale and Barcia Bale were starting out,” said Allan.

“Breeders had a thought that he would sire only speedsters, but they forgot he was second in the National Sprint and Temlee and won the Traralgon Cup all of them over 500 metres.”