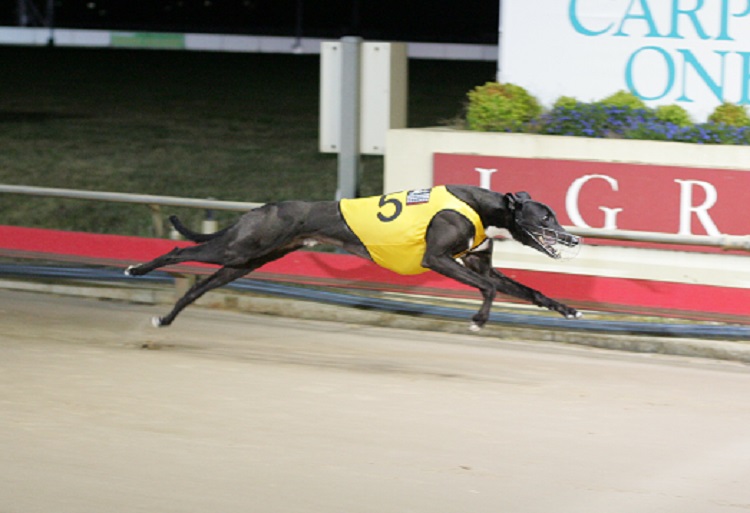 Winner at five of his six starts when wearing the pink rug – his only defeat second to Beast Unleashed in a semi-final of the Peter Mosman Classic – Chief’s Empire goes into Tuesday’s $25,000 to-the-winner decider as one of the leading chances after a sparkling second to Stop Line in last week’s heats.

“Realistically I think he needs to be 1 ½ lengths clear heading through the top bend if he’s to win. Stop Line is boxed to win from the inside and is the fastest dog in the race. I couldn’t be happier with Chief’s Empire’s preparation for the race – he’s happy and healthy – spot on.”

Chief’s Empire, a fashionably bred son of Fernando Bale and Magic Diva, amassed 16 spectacular wins from 42 starts in Victoria before being sold and transferred to Page’s kennels.

“It was a bit of good fortune that I came to get him,” Page said.

“A syndicate bought him and were keen to send him down to Tassie to contest some easier races and I’m really grateful for the opportunity to train him.

“It would be fantastic to get a result for the owners on Tuesday; the syndicate has invested good money in the dog so they deserve it.”

“I’d given him the one trial there so last week was his first go in a field so I’d expect him to improve,” Page offered.

“He just missed the Launceston 278 metre track record two runs back which was a bit of a shame.

“He’s a high speed dog that’s been racing on slowish tracks recently which hasn’t helped. I’m hoping he gets conditions to suit Tuesday.”

Bookies have installed Chief’s Empire, a finalist at group 1 level on two occasions, at $6.50 where the red-hot favourite Stop Line is $1.90 from box one.

Second elect and the only other runner under double figure odds is Hobart track record holder Stanley Gordon at $3.50.

The Ted Medhurst-trained son of My Bro Fabio looked all at sea in last week’s heat victory, getting home on ability alone.

Meanwhile, earlier on Tuesday’s program Page lines up Hartley Kris and Lenard’s Boy in race four over the 452 metres.

“They both should be very competitive but I’d say Lenard’s Boy is the better of the two – actually he’s a massive chance,” Page added.

“He’s better over further but I’m working him back up and he’s going well.

“Hartley Kris is in with a shot as well – hopefully it’s a big day!”