TRAINER Mark Delbridge heads to The Meadows on Saturday night with his Group 1 staying star Zipping Rambo and a team of hopefuls. 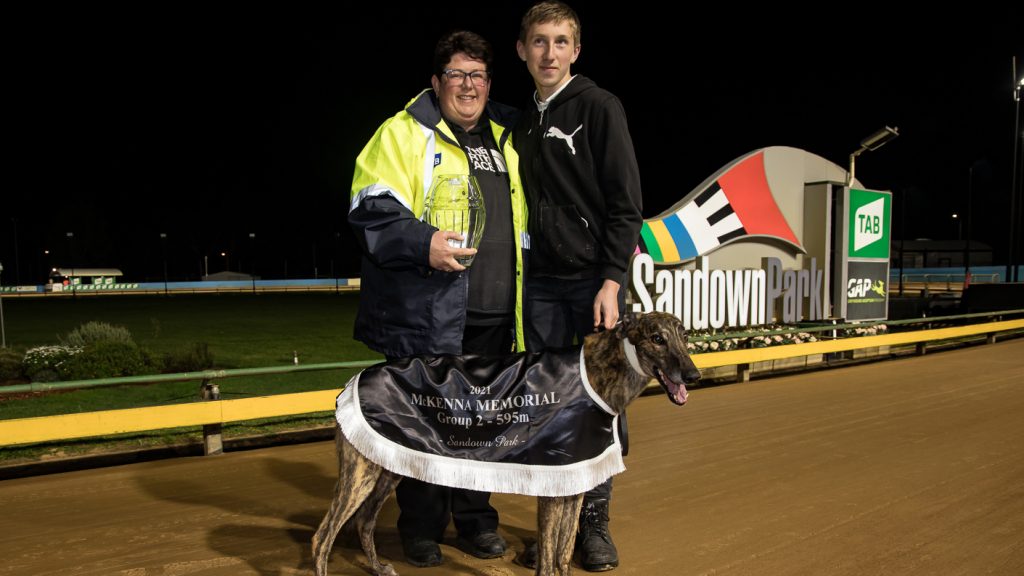 MARK Delbridge, fresh off Christo Bale’s memorable back-to-back victories in the G2 McKenna Memorial at Sandown on Thursday night, heads to The Meadows on Saturday night with staying star Zipping Rambo and a team of hopefuls.

“Right from when he settled so close around the first turn he was going to win.”

Delbridge also finished third with Jarick Bale who he said was unlucky not to have finished closer but for an early check in running.

He takes Zipping Rambo to The Meadows for a return to 700m racing and for his first race at the track.

“I’m happy with him but he had no luck in the heats of the McKenna Memorial at Sandown,” said Mark. “He’s checked out great since and he will be much improved on his latest 700 metre race.”

Hank The Hustler grabbed Zipping Rambo late to win at Sandown on June 24.

“I admit Rambo was underdone for that run but he will be right for Saturday night,” said Mark.

“He’s getting ready for The Destini Fireball at The Meadows on Saturday week.”

Quincee Bale: I’d be happy if he runs a place.

Vardan Bale: Good win on Wednesday at The Meadows. He can be tardy early and is best suited off a wide draw. But he’s a god chance.

Circumstance: Nicely boxed where he is. I like his place chances, but you never know what to expect with him.

Graclyn Bale: I’d rather her closer to the fence but if she leads she will be hard to run down. She won over 595m at Sandown in 33.99 when leading. But, she can come from behind as well. It will be pot luck with her around the first turn.

Byron Bale: His last few runs have been ordinary and after leading.

Get Real, Winlock Thor and Spring Cobra: Winlock Thor will crash left at the start which could wipe out Get Real. But, if she comes out she’s a good chance. She does not like getting cluttered up. Spring Cobra can be a little tardy early but he’s got a motor and will be finishing on strongly.