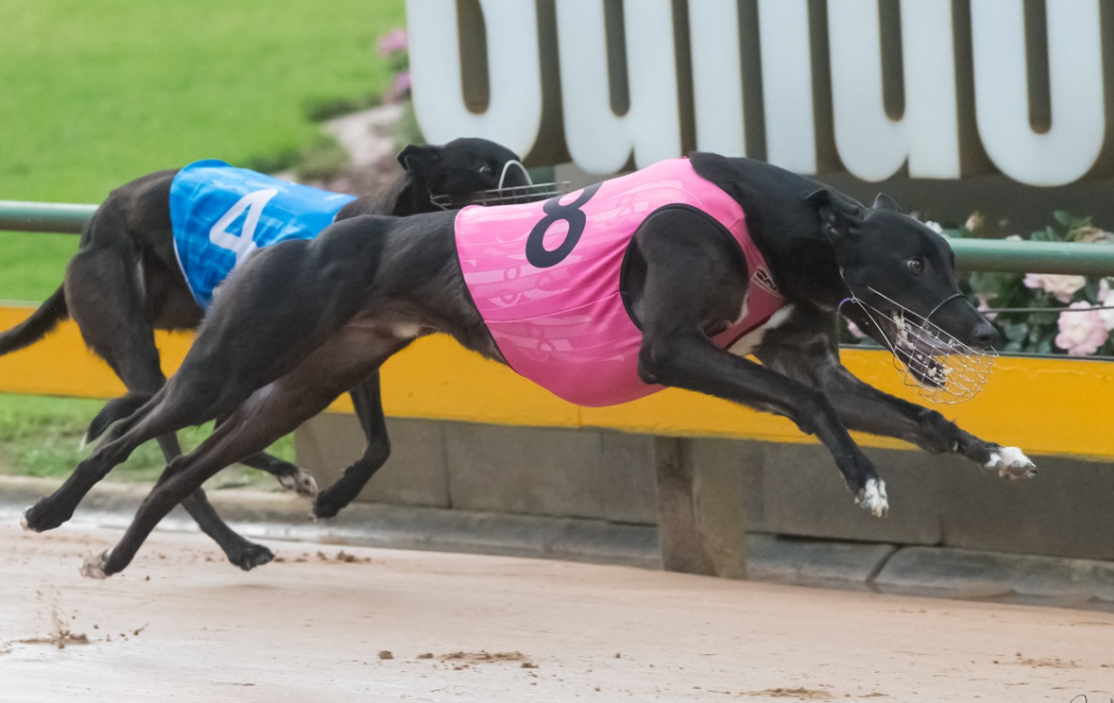 He is part of a team of talented greyhounds that leading Kiwi trainer Lisa Cole is venturing south with from her Palmerston North base to Addington Raceway.

Mustang Charlie’s owner Glenn Petrie relocated his charge across the Tasman on the recommendation of Jason Thompson after he was outed for 28-days with a marring offence at Sandown Park on July 1.

The son of Aston Dee Bee and Mepunga Fame quickly adapted to his new surroundings when he commenced trialling in quick fashion, including a sub-30-second 520m gallop around the Hatrick Raceway.

He was then sent out as the hot $1.20 favourite for his NZ debut assignment, where after copping a fair degree of buffering when leaving the Manawatu 457m traps, he finished strongly for his three-quarter length second to another former Victorian chaser Bee Lucky Banjo.

There were no early issues for him next up when he cruised to his effortless 25.95s 457m victory.

“Charlie is a very fast greyhound with a huge motor. They don’t come much quicker than him – one on one I rate him up there with Federal Morgan. He has the potential to be one of the best dogs in the country,” stated Brendon Cole.

He unfortunately went amiss when contesting another big-ticket event.

The Cole teams’ representation at Addington is aimed to acquaint squad members with the Christchurch GRC’s headquarters track prior to the late October set of heats for a number of Group 1 events, including the New Zealand Cup.

“Mustang Charlie is a work in progress who needs a couple of 520m races to tighten him up for the Cup series, so we’ll probably head down there over the next couple of weeks,” advised Cole who is reeling following a pair of family bereavements.

On top of that the kennel resources are currently fully stretched, having to also send a team of kennel runners north to Cambridge to race tomorrow, following the abandonment of Monday’s Manawatu meeting owing to unsafe track conditions.

Their massive racing operation are also severely impacted on with the current indefinite closure of the Hatrick track.

It is an intriguing field that Mustang Charlie will match his paws against tomorrow. He’ll be loaded away into the three-trap for his race three 520m task.

The start will be crucial for him as lurking down on the rail from the ace-trap is the strong Gary Cleeve locally prepared Group race winner Know Keeper.

It is an ironical twist that the Cole kennel finished up with Mustang Charlie, as back in 2019 the Cole’s purchased an eight-week-old litter sister to Mustang Charlie, naming her Big Time Flame. She’s lining up in the third race during Friday’s Manawatu meeting.

“We wanted to get involved in the Mepunga bitch line for ongoing breeding and buying her gives us the opportunity of doing so,” said Cole.

Pawnote: It is a welcome return to racing at the Manukau Stadium this Sunday with a seven-race mini meeting carded. The meeting is for Auckland based greyhounds only, as the Auckland region is still placed in a strict regional no-travel Covid-19 lockdown.

The resumption of racing in Auckland follows a seven-week Covid-19 racing suspension at Manukau. Greyhounds who are racing on Sunday has been trialling at the venue over the last couple of weeks.