PEARCEDALE trainer Karen Pitt is hoping box one will be key to the chances of her rising star Compliance in Wednesday's Western Districts Derby. 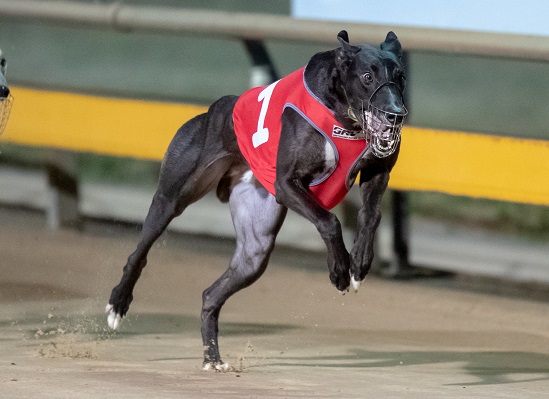 PEARCEDALE trainer Karen Pitt is hoping box one will be key to the chances of her rising star Compliance in Wednesday night’s Listed Western Districts Derby at Ballarat.

Compliance won his way into the $20,000 to the winner final after an impressive all the way victory over Boston Garden, running 25.10 for the 450m trip. While his time was some three lengths slower than fastest qualifier Paddy Wants Pats (24.93), trainer Karen Pitt believes the box draw brings her charge into contention.

“He’s probably got his chance by drawing the red,” she said.

“There’s some dogs that ran quicker than him (in the heat) so I think he’ll need to hit the line a bit stronger, but drawing the red does put him in the race with a chance. If he does everything right he’ll be thereabouts.

FIELDS AND FORM FOR BALLARAT WEDNESDAY

Pitt believes there will be plenty if pressure in the early stages of the race but was happy with the way Compliance responded when challenged in his heat and is confident of a repeat performance in the final.

“His main asset is the first two steps out of the box, that’s where he wins his races,” Pitt continued.

👀 MUST WATCH FROM WEDNESDAY

Dual Group finalist PADDY WANTS PATS (3) was the fastest of the four heat winners for the #WesternDistrictsDerby (450m) at Ballarat in a dazzling 24.925 seconds for trainer Kelly Bravo.

“Sometime when he’s led in the lower grade races, he’s been that far in front he hasn’t had a lot of pressure so it was good to see him kick near the line and really work hard to win the race.

“Everything he does he’s learning as he goes – it’s all experience so it’s good to be put in different situations that he’s going to have to do when he races against the better dogs.”

The Western Districts Derby has quickly grown to become one of Victoria’s premier age restricted races and an excellent form reference going forward.

Of the last five Derby finals, eight greyhounds have gone on to win at group 1 level after reaching the final, while four of the last five Melbourne Cup winners have contested the series.

Pitt is hopeful Compliance can build on that record starting with the upcoming Australian Cup at the Meadows.

“It might be throwing him in the deep end, but we’ll see how he handles the rise in grade and see how he goes in that series.

“That will probably answer a few questions for us and we’ll get an idea of where he’s at after that.”

The Listed Western Districts Derby will be run at 9.18pm.