But unlike Pike, who has taken a strong stance against vaccination, it’s understood underlying personal medical issues are behind Hobby’s reluctance to be vaccinated and comply with the soon to be state-wide regulation which Racing and Wagering Western Australia mandates in the state.

Hobby, 65, is regarded as Western Australia’s most successful greyhound trainer, having put the polish on some of the sport’s brightest stars, winning just about every major race on the calendar in a career spanning 45 years. 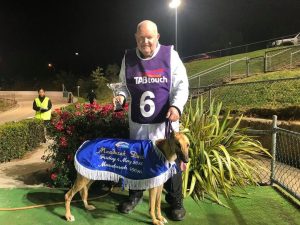 Boasting upwards of 150 greyhounds at his sprawling Nambeelup property, Hobby has won a staggering 2654 races in the past decade for $10.3 million in prize money.

In that time the prolific premiership winner has contested a remarkable 23 group 1 finals, 36 group 2 finalists and 48 group 3 finalists, winning a Perth Cup with Trouper Monelli and Galaxy with Zack Monelli.

His absence from the training ranks is set to leave a significant void with the Perth Cup winning trainer having been responsible for no less than eight per cent of the total runners in WA in the past decade.

At Cannington on a Saturday, Hobby regularly has between 10 and 20 greyhounds engaged on a program, meaning field sizes are expected to be a major casualty when he hangs up the collar and lead.

The Greyhound Recorder spoke to Hobby about his looming departure from training who, for the moment, chose to not go on the record and make comment.

A number of Hobby-bred and trained greyhounds have been sold in recent days while of others will depart prior to February 5.