Curtain Closes On The Career Of Catch The Thief

MULTIPLE group winner Catch The Thief has been retired after tearing a back muscle at The Meadows on Saturday in a heat of the Victorian sprint.

MULTIPLE group race winner Catch The Thief has been retired.

The 25-time winning son of Aussie Infrared tore a back muscle in a heat of the Victorian National Sprint series at The Meadows on Saturday night, drawing the curtain on a stellar career which netted $253,720 in prize money earnings.

“The tear is pretty bad which meant the only real option was retirement,” trainer Jason Thompson said.

“You’d be skeptical of a young dog even coming back from it so given his age and everything he’s achieved the owners agreed that retirement was the right call.

“He’ll make a fantastic pet and I’m sure the owners will register him for stud as well. He’s a beautiful dog.” 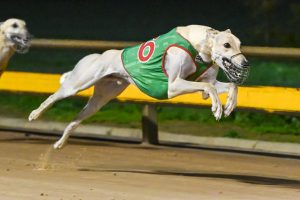 Catch The Thief – or ‘Ghosty’ as he has become better known in racing circles – raced on 55 occasions for 25 wins and a further 18 placings.

His first 39 starts were under the guidance of Matt Clark which included victories in the Group 2 WA Derby with the help of caretaker trainer Steve Shinners and Group 3 Warragul St. Leger.

The latter stages of his marvelous career were for Jason Thompson which produced runner-up efforts in the Group 2 Shepparton Cup and Group 1 Harrison-Dawson at Sandown Park.

“When he came back to racing there was always the question of how he’d measure up after the wrist injury,” Thompson said.

“But he showed the dog he is with some great performances and sensational times. He gave his all each and every time he went to the races which is all you can ask for.”

His brother Playlist landed the Group 1 Vic Peters Classic last year at Wentworth Park in a race where Catch The Thief finished fourth.