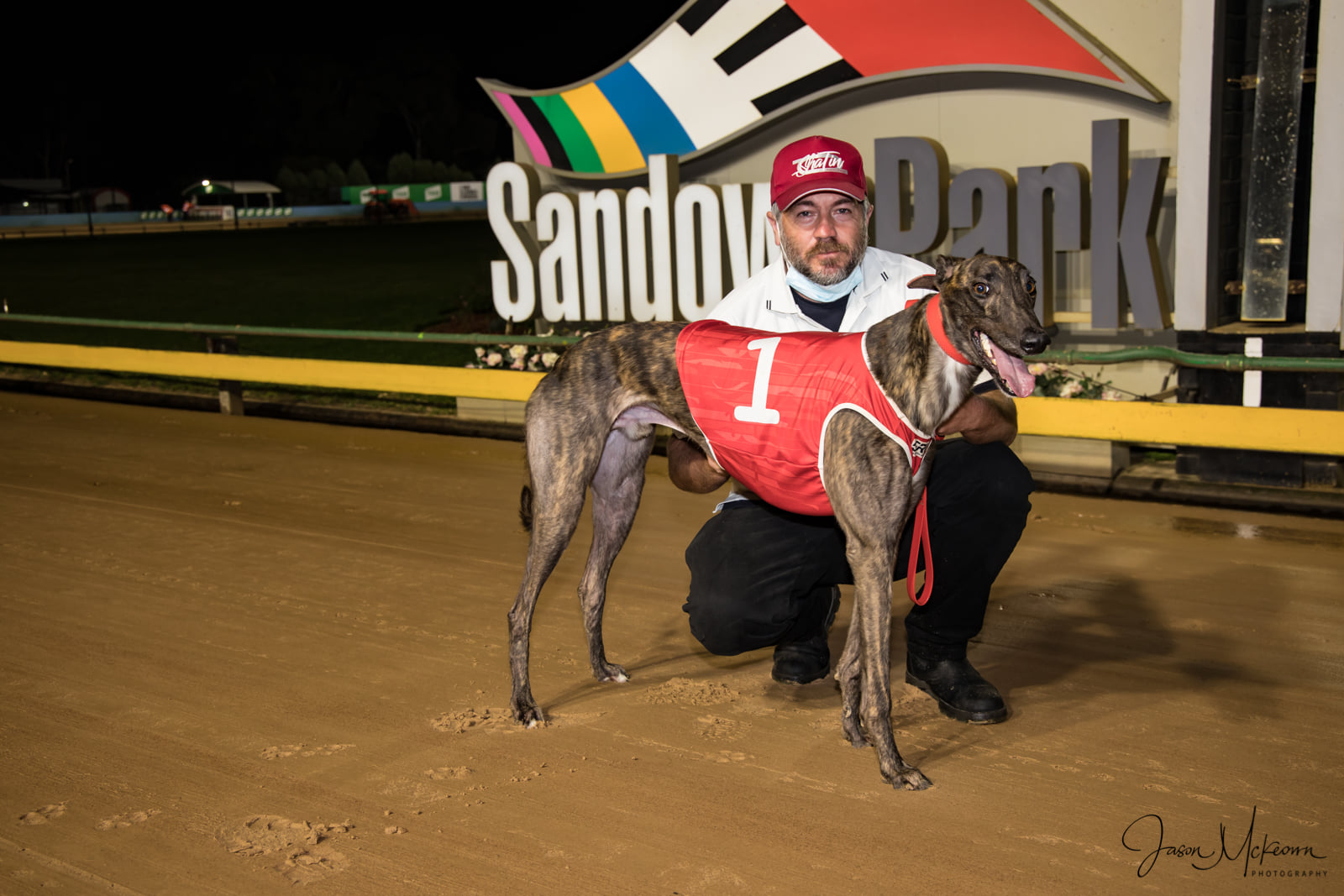 A near-record heat victory by Jarick Bale has Mark Delbridge on target for back-to-back victories in Sunday’s Rotti Security Sale Distance Championship (650m) as the countdown to the G1 Sale Cup heats up.

Jarick Bale is a younger half-brother to last year’s Distance Championship winner Christo Bale, a middle distance star that went on to run fourth to Houdini Boy in the Sale Cup.

Jarick Bale was tested past 600m for the first time in his 48 starts in the first of two Distance Championship heats, where he started $1.80 favourite.

The son of The Meadows 525m record holder Allen Deed relished the rise in distance, careering away in the home straight to trounce G1 Hume Cup winner Knicks Bale by 6.8L in 36.72sec, less than one length outside Burn One Down’s course record established in July 2017.

“Jarick Bale seems to be a bit stronger than Christo Bale,” Delbridge said.

JARICK BALE (4) was devastating in the first heat of the #SaleDistanceChampionship in 36.719 seconds for trainer Mark Delbridge.

“Last week was his first go over the 650m and he ran it out really good.

“He spaced them a bit and I was real happy when they said he was only a length off the record. The time was a bit of a surprise. Christo Bale won the final in 37.00sec last year.”

Jarick Bale has a huge advantage on the clock heading into Sunday’s $10,000 to-the-winner final, with the second heat won by Invictus Rising, trained by Garry Selkrig, in 37.12sec, and Delbridge says Box 1 will suit his fastest qualifier.

“He wants the fence; as long as he uses it,” said Delbridge.

“If he gets a nice clear run I don’t see any reason why he won’t win.

“When Graclyn Bale beat Jarick Bale at Sandown (Sir John Dillon Memorial) she came out a lot better and he got a few little checks. He was probably lucky to run second.

“Graclyn Bale can be a bit funny and it depends how she comes out. If Jarick Bale is running second he should run past her, but as long as one of them wins I don’t really care!”

Delbridge had planned to have a high profile third string to his Sale Cup bow in Zipping Rambo; however the G1 Sandown Cup hero’s career is hanging by a thread after a nasty fall in the Sir John Dillon Memorial.

“He’s got a bone chip in his knee and also tore a ligament off his knee,” Delbridge explained.

“There’s a chance he might race again but we’ll know more after he gets x-rayed again on Monday. If he needs to have a screw put in it, at three and a half he’ll be finished.”

Jarick Bale shares the second line of betting in TAB’s ‘Pre Noms’ Sale Cup market at $8, with Gypsy Wyong and Mepunga Warrior, with Mepunga Ruby $6.50 favourite for the year’s final G1 event, to be run on Boxing Day.

Andrea Dailly’s dual G1 winner Gypsy Wyong will also be in action at Sale on Sunday, lining up in the Valda Clavarino Memorial, also over 650m.