TRAINER Mark Gatt has captured a second Megastar title courtesy of Ritza Donna’s sparkling victory in the Group 1 showpiece at Dapto on Thursday. 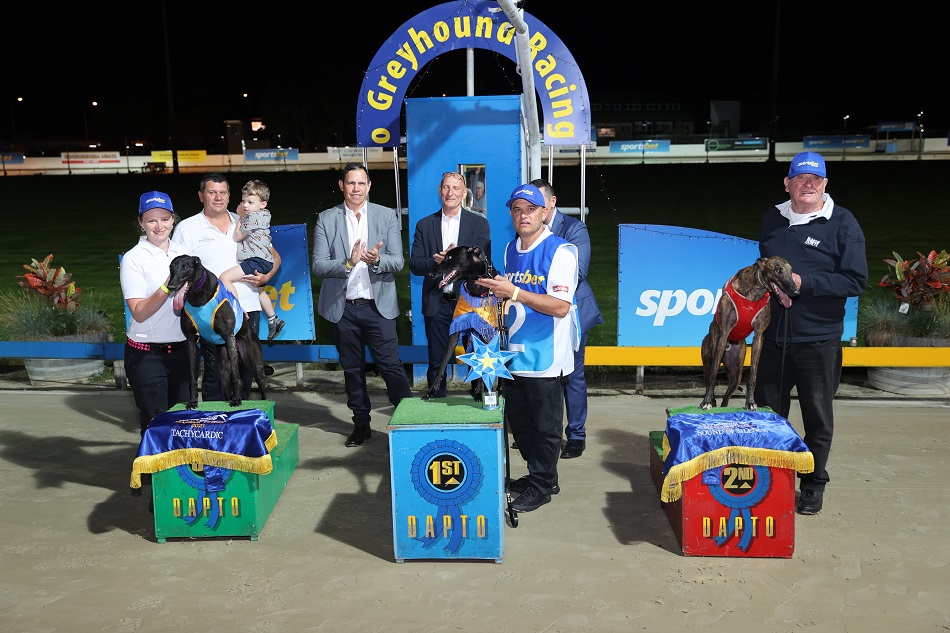 A decade on from Oaks Road’s thrilling win in the south coast feature, Ritza Donna made full use of box two to upstage her more fancied rivals in a sizzling race record 29.43.

Betting suggested Zipping Kyrgios and Sound Of Silence would dominate the $75,000-to-the-winner finale but as soon as Ritza Donna got out chasing early leader Marvin’s Girl down the back she was always going to be hard to hold out.

How good is that Group 1 feeling?! Mark Gatt's Ritza Donna has taken out the @sportsbetcomau Megastar at @DaptoG… we caught up with him after the race. pic.twitter.com/n17HesiCRn

“Good boxes win big races and she did everything right tonight when it counted – I couldn’t be prouder, I just love this little girl,” trainer Mark Gatt told GRNSW’s Michael Cowley post race.

“She’s such a good chaser and the race played out the way I hoped it would. She’s always had a lot of ability and put the time on the board as well tonight to back it up.

“I was a bit concerned when Sound Of Silence started making his run but you can’t get run down running home in the time she ran.

“It’s a big thrill to win another Megastar. This is what you get up in the morning for, to win group races. It makes the hard work and grind all worthwhile.”

Finishing a gallant second in the Megastar was the Frank Hurst-trained Sound Of Silence 1 ¾ lengths away while rank outsider Tachycardic ran a bottler of a race to finish third for Kayla Jane-coleman another 3 ¼ lengths astern.

Now a winner at eight of her 23 starts, Ritza Donna’s Megastar triumph continues the significant role trainer Mark Gatt has played in the race over the years.

As well as annexing the race with Oaks Road, Gatt also guided Ritza Lenny to a third placed finish when favourite in 2016 while in 2020 grand campaigner Ritza Coen finished third behind superstars Flying Ricciardo and Simon Told Helen.