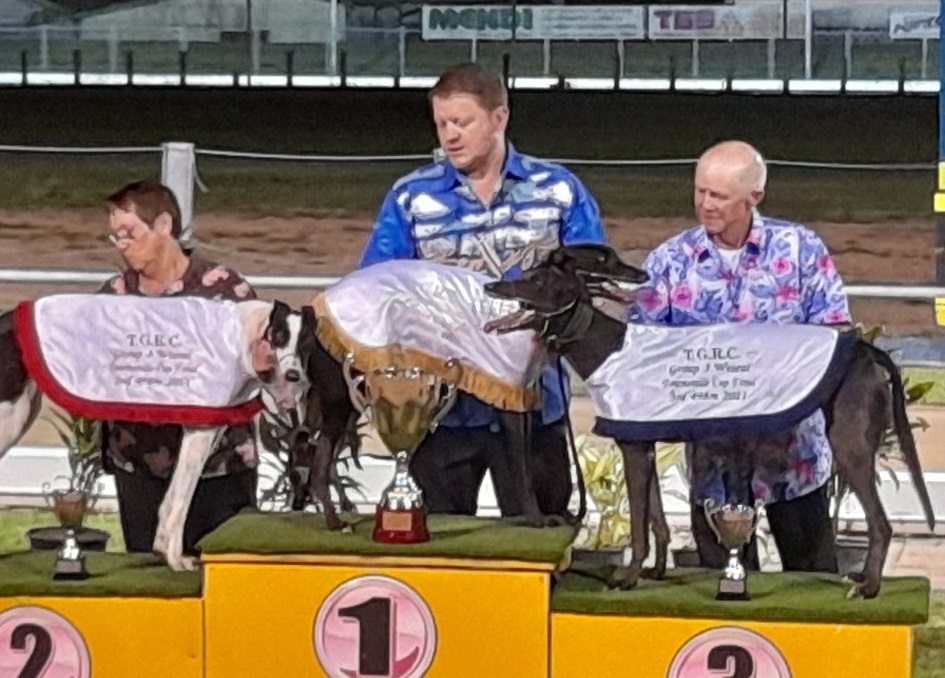 And Matt Heilbronn declared to Townsville Club president Gary Heath back in June the bitch would win the $40,000-to-the-winner Cup.

“Gary came down for the Ipswich Cup final and I told him then we would be in Townsville to win his Cup,” Heilbronn said.

And that she did.

Dulceria (Zambora Brockie-Cindy Rumble) scored by a length at $11 beating early leader Flying Jet with hot favourite Excuse Me Jack in third a length and a half away.

Heilbronn “declared” his bitch to anyone who would listen the night before the race.

“Yes, it’s my biggest thrill in 35 years being involved in greyhound racing with my dad, but the last 10 years seriously myself,” Heilbronn added.

“My only worry was if Flying Jet knocked her down at the start. I know he’s got lots of early pace but I was confident she would win with a clear run early.”

That is what she got and she settled on Flying Jet’s tail coming to the home turn and was too strong at the finish.

She will head home with the heats of the Ipswich Futurity her target next Saturday.

“The long-term target is the Group 2 Queensland Futurity at Albion Park in December,” he added. “I want to run her through the grades before that.

“There is little point looking at southern races because of the border problems.”

Heilbronn, a keen student of pedigrees, has already mapped out a future breeding program for Dulceria to mate her to Aston Rupee who on Thursday night smashed the Sandown track record.

Heilbronn was full of praise for Brisbane trainer and muscle man Terry Priest who has worked hard on a few small injury problems with Dulceria in recent weeks.

“It is exciting that she was having her tenth race start in the Cup and has now earned $60,000,” Matt said.

“There was a bit of pressure on me to get it right. Her mother is a sister to the mother of Louis Rumble (also a Townsville Cup finalist). The pressure is off now.”

In a night of feature racing at Townsville, Rhonda Essery won the Nth Qld Sprint with Miss Priddle, and the Cup Consolation with Stratford, while Brad Belford won the Stayers Challenge for Toni Graham with Mahogany Row.