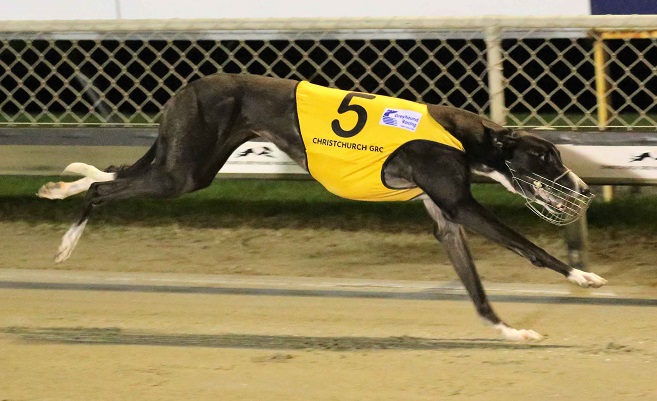 Dyna Weslyn sure was an outstanding freewheeling stayer who completely dominated her staying rivals during the 2018/19 racing season.

Her season was crowned when Dyna Weslyn was named as the New Zealand 2018/19 Greyhound of the Year during the annual GRNZ awards evening in Wellington last Saturday.

Dyna Weslyn commenced her season on her home Addington track on August 2, easily winning her 645m assignment and setting a new 645m track 37.68s record (since broken). She then mixed her race distances alternating between 520m and staying races.

Victory was landed in the Group 2 Kingston Cup (732m) after which was followed by a Victorian staying campaign which netted her two super 725m wins on the Melbourne based The Meadows track.

On her return home Dyna Weslyn finished second in the Group 1 Wanganui Distanced (to Cawbourne Taylor, who was trained by Roberts son Matt). A trip to Cambridge was her next big task, resulting in a convincing win in the Theresa McDonald Memorial Cup at Group 2 level over 747m.

Back at home at Addington Dyna Weslyn rocketed through her 732m task, easily breaking the long-standing Addington track record when posting 42.65s. It was then onto the biggie – the prestigious $100,000 Duke Of Edinburgh Silver Collar over the demanding Manukau 779m distance.

A convincing heat win saw her being installed as the hot 1.40 favourite. During the middle stages of the Group 1 decider she was in cruise control. However, missing some work when heading into the final saw her starting to take some light paw steps. At the judge she held on by a rapidly closing head margin, returning 46.48s for her biggest career win.

More Group 1 racing followed which saw her successfully annexing the New Zealand Stayers Cup back at Addington clocking 43.13s for her 732m gallop. Her dominance over her rivals during the season can be measured by the convincing margin Dyna Weslyn won the points-based NZ Stayer of the Year title. She accumulated 102 points – a convincing 50 points in front of her nearest challenger.

Dyna Weslyn’s season yielded her with 14 wins and seven seconds during it. Her 26 race days outings provided her owner with $127,976. She has since been retired from racing after coming into season just days before she was going to contest the Group 3 Sydney Cup over 720m at Wentworth Park.

Dyna Weslyn’s value in the breeding kennels will be immense, especially if this daughter of Kelsos Fusileer and Xylia Allen passes on all of her known high quality attributes to her progeny. As Craig Roberts frequently said throughout her career; “Dyna Weslyn was the most professional greyhound I have ever trained. She was the complete package both in the kennels and on the race tracks.”