GRAND sprinter Ebby Infrared will be searching for a winning entry into the acclaimed 100 Club in Thursday's NSW Sprint Championship at Dapto. 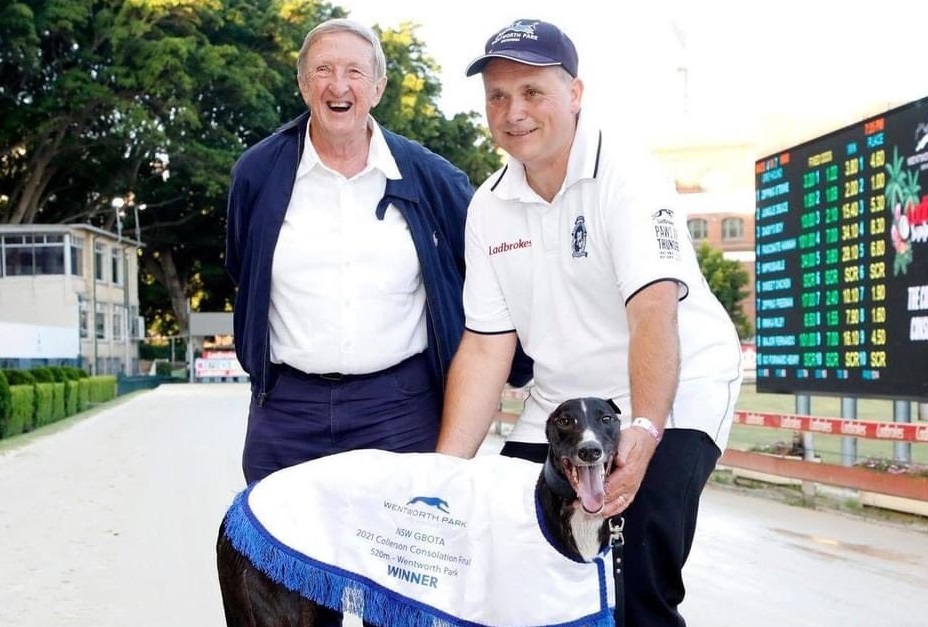 GRAND sprinter Ebby Infrared will be searching for a winning entry into the acclaimed 100 Club in Thursday night’s NSW National Sprint Championship (520m) at Dapto.

“To bring up start 100 in a race of this stature is a big achievement – he’s been a wonderful dog,” beamed Eberand.

“I make no secret that he’s my favourite. There’s just been something special about him from when he was a pup. And he’s turned into a brilliant race dog. All he wants to do is go to the races – he loves it.”

“He won the Silver Collar at Dapto in June and box one is an advantage on Thursday night,” Eberand said.

“To win the Listed Collerson with him was a big thrill and even though he hasn’t won a group race yet he’s been very competitive.

“And for as long as he’s fit and healthy he’ll keep racing and down the track he could be a great Masters dog. Much like what Sunburnt Highway has done.”

Since debuting at Bulli in July of 2019 Ebby Infrared hasn’t missed a month of racing since. In 99 starts he has incredibly been in the money on 75 occasions.

And only adding to his hugely impressive record is the fact that it’s been done almost exclusively in feature races, qualifying for six Group finals.

“He hasn’t had a lot of luck in the big ones,” Eberand said.

“With respect to Mottza I think he should have won the Maitland Cup he was in – he was very unlucky,” Eberand said.

“And he didn’t have much luck in this year’s Bulli Cup either. He strained a stomach muscle in the run but still ran third.

“But to be honest with AJ every win feels like a group win.

“I broke him in myself and showed from early on he had talent. At 13 months he went 15.30 out of the puppy boxes at Richmond. I’ve only had two do that – him and Charlie (Ebby Jet Power).”

“I see a lot of Aussie Infrared in AJ,” Eberand said.

“And it’s the American influence in his bloodline which has made him such an iron dog I think. I don’t trial my dogs – they just free gallop and race. It works – especially for these dogs.”

For Eberand, the lead up to Thursday night’s National Sprint Championship is quite different, with his reigning Maitland Cup winner Ebby Jet Power engaged in the race also.

“It’s the first time the two of them have raced each other,” Eberand said.

“I’ve been torn all week as to which one I’d handle and I’m still not sure actually. I’m not thrilled about them being in the same race but when you get an opportunity to be in a race like this you don’t turn it down.”

Win, lose or draw on Thursday night one thing is for certain.

And that’s AJ will be at his brilliant best on the way home devouring his customary post race soft serve ice cream.

“It’s funny I was posting his race wins on Facebook there for a while but then soon realised his ice cream exploits got a lot more interest,” Eberand said.

“So I’ve just kept going and it’s taken on a life of itself. And I’m sure he’ll enjoy his 100th ice cream on Thursday night whatever the result.”