REGALLY bred sprinter Convict has capped off a remarkable form turnaround to capture the $20k Ladbrokes Gold Maiden at Lismore on Tuesday. 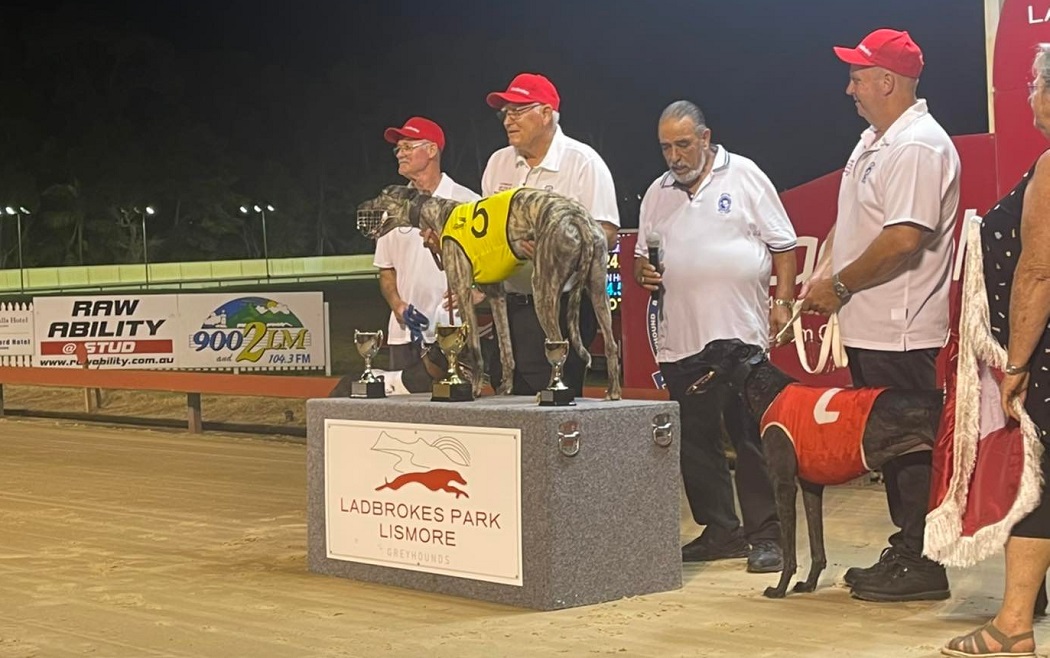 And it was a victory that proved an emotional one for trainer John Watts who only two months ago said goodbye to his late wife Rhonda.

“It’s been a very up and down few months – pretty tough actually,” Watts said.

“My wife Rhonda had been battling a lung disease for eight years and passed away from it on October 19. I haven’t raced a lot the past few years as I’ve been focused on taking care of her the best I could.”

Last week the flashy brindle chaser was an impressive big-odds 24.09 heat winner before running a slick 9.59 first split on Tuesday to set up his all-the-way 24.17 win at odds of 33/1.

The surprise final win was the son of Collision and Twisted Love’s fourth start for Watts after getting the dog to train as an eight start maiden from owners Travis Falls and Rod Graham.

“Last night was his fourth start for me and he’s now had two seconds and two wins for me.

“When I got him he had a little virus which might have been holding him back.

“But all his early runs were his first ever starts with other dogs so I’m sure that experience did him the world of good.

“As good as he’s gone the past two weeks there’s still a bit in the tank I think. He’s improved and improved each time I’ve stepped him out.

“And he’s built like a stayer not a sprinter.”

Not many big maidens are won by greyhounds which have already faced the starter on ten occasions but Convict bucked convention on Tuesday night.

A son of champion sire Collision, Convict is out of Twisted Love which is a daughter of Greyhound of the Year Double Twist which hails from the famous Tifi line.

“Rod (Graham) had three from the litter and he asked me when they were pups which one I liked the most – I straight away told him the brindle bloke,” Watts recalled.

“When he kicked off I didn’t have any room for him but the opportunity to get him came along not long back and I thought why not. It’s all worked out great.”

Favourite for Tuesday night’s final off the inside trap was Tony Brett’s fastest qualifier Milligan.

Brett was shooting for his fourth win in the race but after a moderate beginning the exciting son of Keybow finished a creditable third after finding his share of trouble in transit.