PETER Lagogiane is not ready to start leaping down the home straight at Wenty as he's known to do after a MDC victory or two ... but he's close. 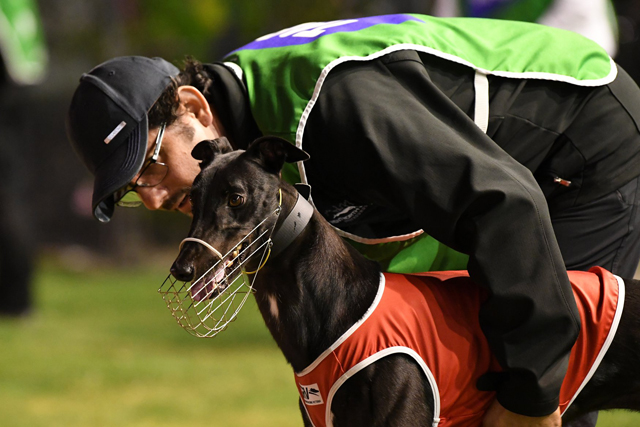 PETER Lagogiane is not ready to start leaping down the home straight at Wentworth Park as he’s known to do after a Million Dollar Chase victory or two … but he’s close.

“Breeders are really sitting up and taking notice of his early results,” Peter said.

“And, some of his recent matings are some very talented broods from great families. It’s very encouraging.”

Among those is Group winner Fantastic Skye, the daughter of Goodesy-Light Fantastic a winner of 18 races and $117,000 in stakes.

Those wins included the Group 2 Laurels and she was third in the Group 1 National Futurity also.

“Yes, I’m pretty happy about that one for sure,” said Peter. “To get breeders like the Fletchers sending their Group winners to him means a lot.

👀 MUST WATCH FROM TUESDAY

Group 3 finalist ZIGZAG CABANG (4) was brilliant from start-to-finish winning by four lengths in a quick 22.863 seconds at Horsham (410m) for trainer Greg Berry.

“And it says a lot about how he’s going. The early percentages are great.”

Beast Unleashed, winner of the Group 2 Launching Pad and Group 2 Gosford Gold Cup and track recorder breaker at Gosford, burst into the spotlight only last week when his son, boom youngster Sacred Stance, was the subject of a massive purchase from Tasmania.

He’s raced 10 times for eight wins and been a finalist as a pup in the Group 1 Hobart 1000 and Group 3 Devonport Chase. Andy Lord just had to have him for his kennel.

“I’m getting calls all the time from breeders and rearers who rave about Beast’s pups temperament and especially their chase,” said Peter. “And, you can’t get better than that.

“They all say what great chasers they are. I like hearing that from breeders.”

Lagogiane has four Beast Unleashed-Shez Got Soul pups being reared at the Hallinan property at Orange.

“We trained her to win 15 races and she was a fine stayer for us. Cammo (Hallinan) rang me just the other day to say how pleased they are with those pups and that his dad Marty is so impressed he’s sending bitches to Beast,” he said.

The bitch was third in the Group 3 Newcastle Cup and a 29.70 Wentworth Park winner.

It was a terrific clash to start the @ladbrokescomau Devonport Chase heats yesterday where Sacred Stance narrowly edged Blackpool Flash to continue the unbeaten start to his career – https://t.co/VPPK5mKGum pic.twitter.com/ZkGaqyOmEQ

Other recent prized matings include Princess Riot, the winner of 11 races, and a litter sister to Group 1 stars Whiskey Riot and Fernando’s Riot and a half sister to MDC winner Mystic Riot and Group 1 National Futurity winner Blue Sky Riot.

Proven Queensland broodbitch Isla’s Style, a Silver Dollars winner at Albion Park and Group 2 Laurels finalist, is another mated to him.

She has had two litters and both have high quality sprinters including Grafton track record holder Orara Dan.

Zipping Kyrgios’ litter sister, Zipping Freeman, is another to be mated to him.

Adorable Lady, a sister to Victorian stars Van Ann and Waleonjon, has also been mated to Beast Unleashed.

Mini Diva, a sister to Group stars Chief’s Empire and Chief’s Sidekick, is another recent mating.

“Breeders realise Beast Unleashed is bred on an identical pedigree to Aston Dee Bee and he is one of the really great stud dogs in this country,” said Peter.

“The Beast is set to follow in his footsteps.

“He is a great alternative to Aston Dee Bee.”

Beast Unleashed has already sired more than 50 winners in 2022.