THE electric Federal Morgan had a set of turbo chargers attached to each paw when he totally-demolished his Auckland Cup rivals on Sunday. 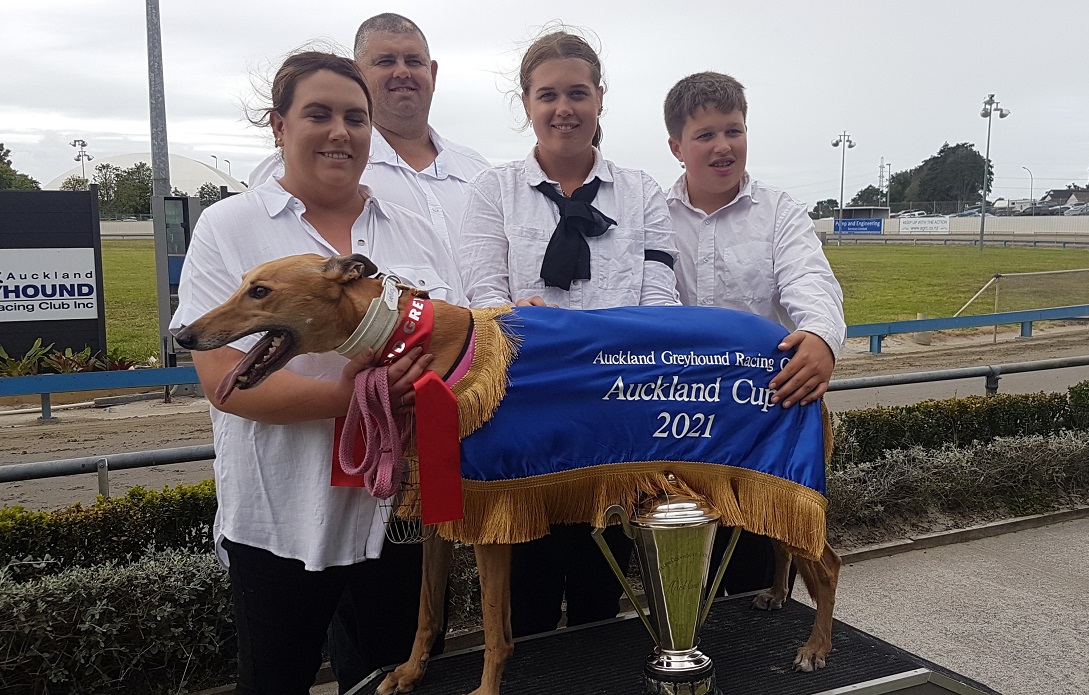 TURBO-charged – the electric Federal Morgan had a set of turbo chargers attached to each paw when he totally-demolished his Auckland Cup rivals on Sunday.

The only concern the Lisa Cole kennels had going into the $80,000 final was Federal Morgan’s eight-trap draw – not so much the wide trap, but in clearing the quick early pace drawn inside him as seen in the previous week’s set of four 527m heats.

The son of Barcia Bale and Absolute Beaut firmly took that concern out of the equation by producing an electric start.

His slick 4.61s first sectional took the thick end of the stake in the Group 1 event away from the paws from his rivals. The much-anticipated event turned into a one-dog procession thereafter as seen by his convincing 6.75 length winning margin.

Federal Morgan hit he line full of running, returning a tidy 29.96s and in doing so he became only the second greyhound to twice break the Manukau 527m 30 second barrier. A strong wind, coupled with cool, overcast conditions prevented him from possibly giving the long-standing 29.77s track record a nudge.

Know Keeper ran the race of his career when he extended powerfully during the run home to secure the runners-up prize for his trainer and co-owner Gary Cleeve.

The Peter Ferguson prepared Dink Shoeys struck traffic issues when heading into the first turn, then suffered from an interrupted passage when racing down the back straight. He kicked on stoutly for his third placing a further 3 1/2 lengths astern.

“We knew Morgan had to find a length from the traps (from the heats) so he could cross them – he found that, and he was never going to be caught after. He is such a strong chaser,” commented Brendon Cole about the fifth kennel training success in the Auckland Cup.

More big money success looms for the Scot Eaton owned greyhound as he will seek to add to his $155,423 stake earnings, the result of 26 wins and 15 minor placings from his 54 races, in Thursday’s $25,000 Golden Chase final (457m) at the Manawatu Raceway.

It was double Group 1 training success for Lisa Cole as two races later saw the resilient Trojan Hoarse thrusting his nose in front at precisely the required time when he snatched victory in the $30,000 Qualified Pet Services Railway Sprint.

The 318m dash was an enthralling paw-wrestle with last year’s Railway winner Buddy Boom winning the break from trap-five for his conditioners Jared Udy and Denise Cottam.

He was stalked by Trojan Hoarse and the pair sprinted to the line locked together. As commentator George Simon called, “These two wonderful sprinters went to war.”

It was the fourth career Group 1 success for the four and a half-year-old son of Fernando Bale and Ocotillo with the Craig Rendle owned canine phenomena having now won 66 races (39 minors) amounting to $245,675 in stake earnings from his 139 race day outings.

“He’s an absolute freakish greyhound who is as a tough as nails. You wouldn’t want to go to war without Trojan in your team. He copped an early check, then was hindered but he refused to flinch,” stated Brendon Cole about the third Railway winner produced from the kennels.