FERDINAND Boy again showed why he is the premier one turn dog of his generation with a comprehensive victory in the Warrnambool Cup. 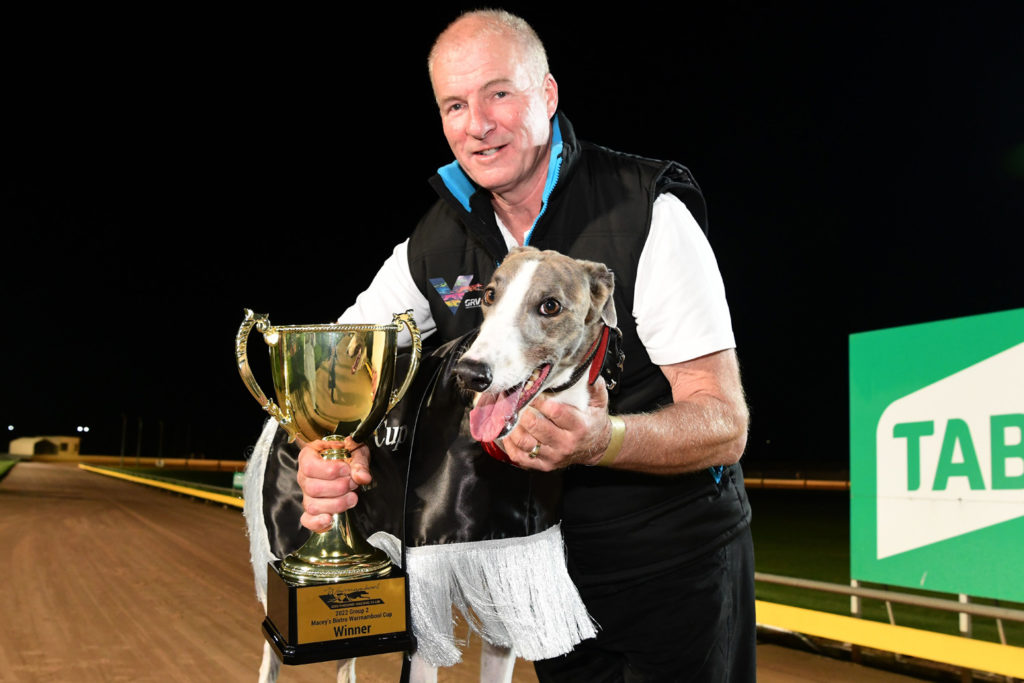 FERDINAND Boy again showed why he is the premier one turn dog of his generation with a comprehensive victory in the Warrnambool Cup last night.

The four-time provincial cup winner enjoyed an unimpeded run from box one, powering beneath Ballarat Cup winner Compliance approaching the first turn and racing to a three-length victory in 25.02.

“There’s a buzz around the kennel this morning, it happens after a group race,” Geall said the morning after claiming his first Warrnambool Cup.

“He just went super. He got out nice enough and even though the 6 (Compliance) beat him out.

FERDINAND BOY is now a four-time Group 2 country cup champion after taking out the 2022 #WarrnamboolCup with a first prize of $47,000.

“The red box gave him a bit of room, and if he does (get that room) he’ll make sure he gets past the leaders. He’s just such a hard chaser.”

The win was Ferdinand Boy’s 43rd victory from 79 career starts, taking his career prize money beyond $446,000, a remarkable figure considering the entire total has been earnt on one-turn tracks.

Geall believes the number of one-turn tracks and races available to him has been a key to Ferdinand Boy’s longevity with the 39-month old now 20 months into his career.

“He’s raced mainly in feature events so to clock up 43 wins in racing against that competition, he’s just a gun dog.

“What he was doing 12 months ago he’s still doing now. Being able to get him around all the one bend tracks, and to Temora in NSW and down to Tassie, there’s so many one bend tracks and he is a specialist on one bend.”

WATCH: Ultimate professional Ferdinand Boy landed the fourth country cup of his stellar career when taking out the 2022 Group 2 #WarrnamboolCup in 25.02sec.

With his zest for racing showing no sign of ending, Geall is hoping Ferdinand Boy can continue to race throughout the rest of 2022. His short term goal however is the Pink Diamond Champion Sprinter event at Ballarat in June, an event in which he ran third behind Aussie Secret last year.

“I’m not sure what we’ll do from now until then, but that’ll be the go.”

Earlier in the night, Shepperton Cup winner Substantial won a thrilling Cup Night Match Race, running down Hennessy in the final stride to grab the $10,000 prize by a nose.