FERNANDO Blaster became the first greyhound to break 27 seconds for the 484 metres when taking out the Group 3 Casino Cup on Friday. 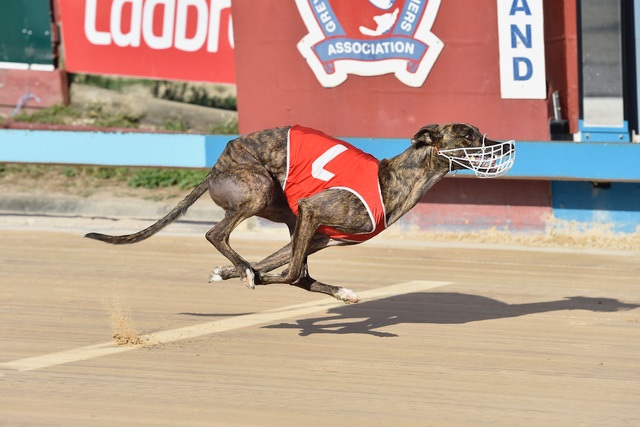 KYOGLE-bred and trained, Fernando Blaster became the first to break 27 seconds for 484m when he smashed his own week-old track record winning the Group 3 Casino Cup today.

Raced by Sydneysider, 76-year-old Merv Papworth, and trained by his breeder Terry Jordan, the son of Fernando Bale-Amy Lyndan got the Cup given to him at box rise when “the rivers opened up around him” and he sped to a clear lead within a few strides.

Short Pork ran on gamely for second for trainer Robbie Andrews but was beaten seven and a half lengths with the winner’s litter brother Painted Picture, raced and trained by Mark Wilkes, never out of trouble early but finishing on well for third but another six and three-quarter lengths away.

Fernando Blaster ran 26.91 to eclipse the track record he had set the previous week in his heat when running 27.08.

For owner Merv Papworth it is the culmination of 35 years in greyhound racing and his search for a quality race dog.

He celebrated with a takeaway Chinese meal at home.

But Merv’s success was cheered on by his family, sisters and brother who all keep a close watch on the dog’s performances.

“My brother Wal goes to the Alexandria bowls club every time he is racing and all his mates join him to watch this bloke run,” said Merv. “the cheer that goes up when he wins is amazing.

“And, my sisters never miss watching him as well.”

“She was blind towards the end of her life but still managed to make sure she found out how the dog went whenever he was racing,” he said. “Mum would be very, very proud.”

Merv is unsure what plans Jordan will now make for Fernando Blaster who added to his Group 2 Lismore Gold Cup victory and equal Ipswich track record.

Merv said he purposely named his dog with Fernando as the prefix because of his famous father, but added “Blaster” when he spotted a couple of years ago a smart Victorian race dog with that in his name.

“It was the first name I put down for him,” he said.