GRAHAM and Leanne Hall's great friends Bill and Jan Warner are rushing back from a North Queensland holiday. There is The Phoenix to win.

GRAHAM and Leanne Hall’s great friends Bill and Jan Warner are rushing back from a North Queensland holiday – there is The Phoenix to win.

On Thursday night at Albion Park, the Hall’s Spotted Elk (Paw Licking-It Gets Better) held off her litter sister Extra Malt to win the Queensland Flame (520m) and earn the right to run in The Phoenix on December 18 at The Meadows.

First prize is $750,000 and the mere fact Spotted Elk has made the race in not lost on the Halls.

“What an honour,” said Graham Hall today. “It is a real privilege to be in such a race. But how wonderful are these two bitches. They just keep producing the goods every single week.”

What a run 👏🏻 Spotted Elk wins the inaugural @tabcomau Queensland Flame at @BrisGreys for trainer Graham Hall, officially booking herself a spot to represent Queensland in the upcoming $1.145 Million TAB Phoenix! 🐶 #QLDisRacing pic.twitter.com/wJGTprpjBo

The Warners are rushing back from North Queensland. Bill will make the trip south with Graham and Jan will stay with Leanne at their Marburg property to look after the rest of the kennel including a bitch about to whelp a litter of pups.

“I have already arranged a kennel to stay in Victoria,” said Graham. “Bill and I will leave on Monday and drive south, arriving some time on Tuesday. The plan is to hopefully give both bitches a look at the track twice.

“We hope to run Extra Malt over 600 metres while we are there as well.

“One look at the track would be good, but two will be better.” 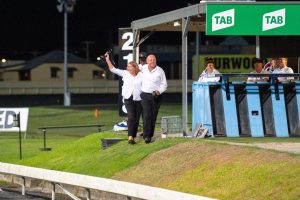 Hall believes her chances rest with drawing an inside box. “The closer to the rails the better,” he said.

“To think a few months ago we would be planning for her to take on a race worth $750,000 to the winner is unthinkable.

“The field is unsettled at this stage but the looming presence of dogs like Aston Rupee is something else. But, Blaze (Spotted Elk’s kennel name) doesn’t know what sort of reputation Aston Rupee has.”

While the Halls know Extra Malt is two lengths quicker of the sisters, Spotted Elk’s early pace makes her a better hope over the sprint course at The Meadows.

“They are fantastic travellers so the car drive to Victoria should not worry them,” said Graham. “We plan to be back before Christmas depending on how the border crossings are holding up.”

Graham and Leanne spent between 2012 and 2018 living in Victoria and training a small team.

“I’d finished up in the police force and we decided to have a Victorian adventure,” said Graham. “It was a real learning curve for us. We always planned to come back to Queensland though. 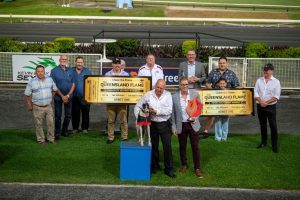 “We picked up a lot of little things, especially to do with checking our dogs.”

WHILE, Graham and Leanne Hall were grabbing the Queensland Flame spotlight, Cyndie Elson almost upstaged them by winning six of the 12 races at Albion Park on Thursday night.

Cincinnati Hope ran second during the night and Cyndie and husband Bill headed home with $31,805 in prizemoney for the night out.