Retired top flight sprinter Flying Ricciardo has been crowned 2020 New South Wales Greyhound of the Year at a gala function in Sydney on Sunday. 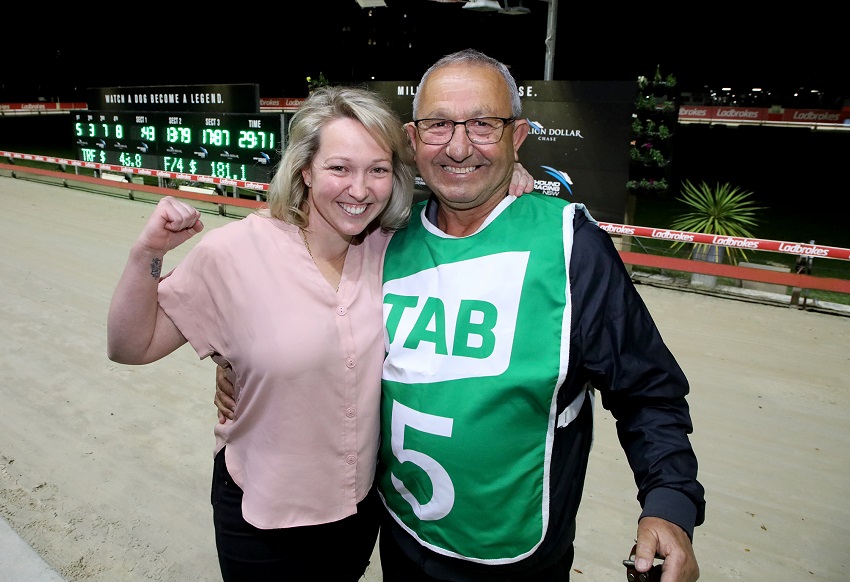 Retired top flight sprinter Flying Ricciardo has been crowned 2020 New South Wales Greyhound of the Year at a gala function in Sydney on Sunday afternoon.

The superstar son of Barcia Bale and Megalodon retired in April following a sparkling 27 start career which netted 22 wins, three seconds and $236,790 in prize money for proud owner-trainer Kristy Sultana.

Boasting a resume littered with achievements, including victories in the Group 1 Dapto Megastar and Group 2 Black Top, Sultana declared the Greyhound of the Year accolade right up there with his career highlights.

“To know he’s now on an honour roll that includes some of sport’s greats over such a long period of time is very humbling,” Sultana said.

“While the big races he won and track records he broke were all special and exciting in their own right, today’s greyhound of the year announcement just caps off everything he was able to achieve.

“It’s a very special day – I couldn’t be prouder.”

Since his injury forced retirement in April, Flying Ricciardo, or Ricci as he’s more affectionately known, has created a huge impression at stud having already served in excess of 50 bitches with over 300 pups on the ground. 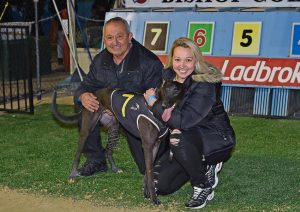 Not a bad effort given we are only now on the cusp of his first breeding season.

“The response to him from breeders has been absolutely amazing,” Sultana beamed.

“He’s served some top quality bitches and it’s been great to hear he’s throwing big and healthy pups. Someone told me the other day his average litter size is over seven which is fantastic as well.

“I couldn’t be happier with how he’s been received at stud. As hard as it was to say goodbye to his racing days, it’s definitely made it easier.”

It was in May last year that Flying Ricciardo broke the Bulli 340m track record on debut, stopping the clock in a flying 18.91 for trainer Sam Sultana.

And what was to follow was a frenzy of amazing performances which ultimately led to his NSW GOTY of the Year title.

“His 29.22 win at Wentworth Park in a heat of the Golden Easter Egg is one that stands out – it was a special night,” Sultana said.

“For him to run the second fastest time ever at the track was special as was the night he ran down Simon Told Helen to win the Dapto Megastar.

“He’s just a special greyhound and the Greyhound of the Year announcement really is the icing on the cake for what’s been a big year or two.”

And with a flood of Flying Ricciardo pups on the ground, their anticipated arrival to the racetrack isn’t the only one Sultana is awaiting, with her and husband Ryan expecting a baby in April next year.

In 2016 leading mentor Jason Mackay took out the Trainer of the Year, and his Melbourne Cup winning dog Ando’s Mac was crowned Greyhound Of The Year.

The 2016 Sire award again went to Magic Sprite, with Lagoon Lowanna awarded the Dam of the Year.

2017’s Ladbrokes Golden Easter Egg winner Striker Light took out the Greyhound Of The Year for that year, with Barcia Bale winning the first of three consecutive Sire of the Year awards, Ebby Miss winning the Dam of the Year, and Jodie Lord winning another Trainer of the Year trophy.

Super stayer Poco Dorado was crowned the 2018 Greyhound Of The Year, her mother Chica Destacada took out her first Dam of the Year award, while Barcia Bale (Sire) and Jodie Lord (trainer) continued their winning runs.

TAB Million Dollar Chase winner Goods Odds Harada was recognised as Greyhound Of The Year in 2019.

His mother Solar Pak was crowned Dam of the Year through the exploits of her offspring including Good Odds Harada and Feral Franky, Barcia Bale completed his threepeat of Sires’ awards, while Jason Mackay won another Trainer’s title.