FLYING Ricciardo has been wound into a $7 favourite for the Easter Egg following his breathtaking 29.35 win at Wentworth Park on Wednesday. 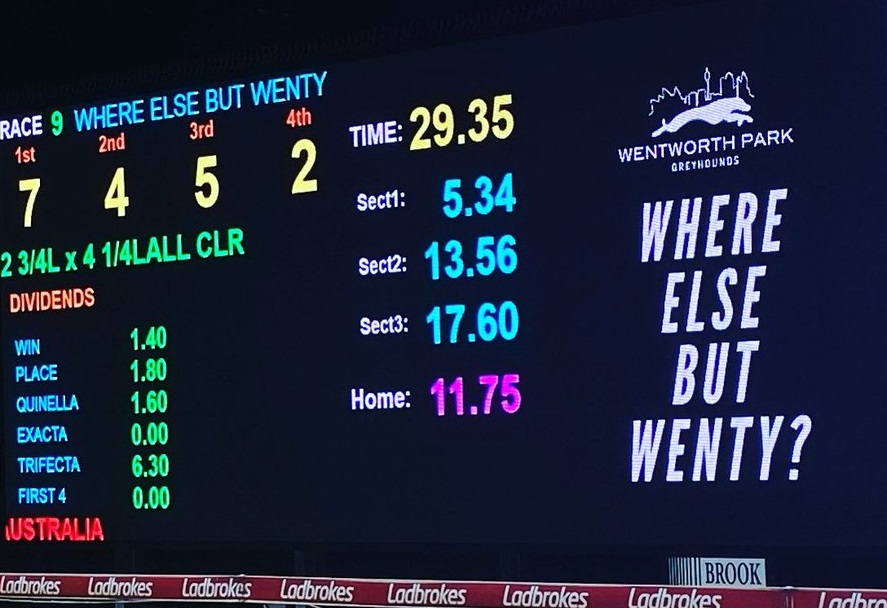 Flying Ricciardo has been wound into a $7 favourite for the Group 1 Golden Easter Egg following his breathtaking 29.35 victory at Wentworth Park on Wednesday night.

Having just his second start since winning the Group 1 Megastar at Dapto in early December, Flying Ricciardo rounded out his Group 1 Golden Easter Egg preparations in remarkable style for trainer Kristy Sultana.

Beginning with brilliant precision, the son of Barcia Bale carved out sectionals of 5.34 and 17.60 en route to his slashing all-round winning performance.

His first section was brilliant.

His 11.75 run home – sensational given his opening three sectionals.

Put simply he’s just a bonafide superstar – the complete package – with the record, and an ever improving one mind you, to back it up.

Following the race, Tab.com.au moved to firm the star sprinter into $7 while some bookmakers went even further, Sportsbet winding him all the way into $5.

To think a mere $5 is being offered about a greyhound in a three week series pitted up against the best of the best is almost unthinkable.

But such was the dominance of Wednesday’s performance – up against just three opposition remember – it’s hard to argue with bookies erring on the side of such caution.

Heats of the Golden Easter Egg are scheduled for Saturday week with the $250,000-to-the-winner finale slated for two weeks later on Easter Saturday.

It’s shaping up as a fantastic series with Flying Ricciardo a deserved favourite for the Easter showpiece.

Now a winner at 21 of his 25 starts with a further three seconds, he boasts eight Wentworth Park victories from nine appearances.

Most importantly above all else he’s a winner – the greatest trait of all.