KATE Gorman had to endure an anxious wait at The Meadows last Saturday to see if Hume Cup contender Mirror Illusion would be her first G1 finalist. 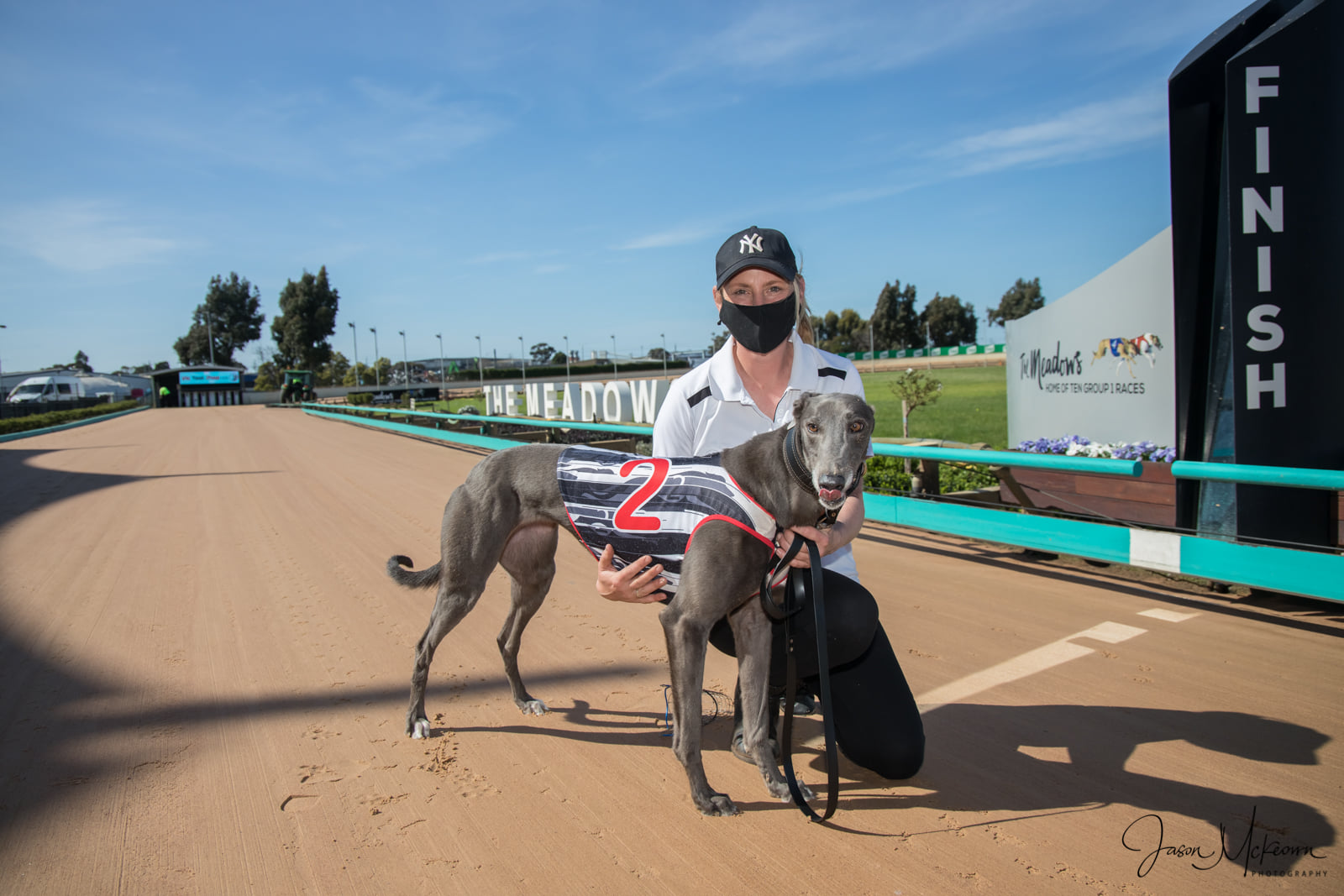 Rising training star Kate Gorman had to endure an anxious wait at The Meadows last Saturday night to see if TAB Hume Cup (600m) contender Mirror Illusion would be her first Group 1 finalist.

In the end, it was worth every minute.

Mirror Illusion, winner of eight of her 20 starts, had her first taste of Group company in the first of six Cup heats, where the daughter of Orson Allen led until the shadows of the post before being run down by Andrea Dailly’s Gypsy Urana.

Gorman, who’s based at Tanjil South, then had to sit nervously through the remaining five run-offs to see if Mirror Illusion would qualify for Monday night’s $75,000 to-the-winner final as one of the fastest two seconds.

“It was a very stressful night,” Gorman laughed.

“I didn’t know for sure that she was in the final until the last heat. I was driving home and had to pull over and have a minute.

“Mirror Illusion wasn’t too worried. She was asleep in the back of the car!”

Mirror Illusion is a relative newcomer to the middle distance ranks, having only had three ‘600s’ heading into the heats.

Drawn in Box 1, Mirror Illusion ($6.60) found the front and saw off $2.10 favourite Zipping Rambo before being claimed in the final bounds by Gypsy Urana in 34.39sec, the second fastest qualifying performance.

“I was rapt with her,” Gorman said.

“She was short of a run and I thought those dogs would go past her but she just puts in so hard. I couldn’t believe they only pinched her on the line and she’ll definitely be better this week.

“She ran the fastest first split of the finalists (8.91sec) and then the draw fell in her favour, with the early pace on her outside.

“The Hume Cup was my goal a few months ago but then she had a couple of minor setbacks and I wasn’t sure if she’d get there but here we are!”

Victory would be a special achievement for Gorman, whose only previous
Group finalist was sprinter Monster Fish, which ran second in the G2 Traralgon and Cranbourne Cup finals in 2018, after leading on both occasions.

“It feels like it’s taken ages but Mirror Illusion has probably got me here a bit sooner than I expected. With the breeding and everything I’ve done to set things up, I hoped I’d be hitting my straps towards the end of next year.

“I’m trying to treat it like any other week, any other race.

“I don’t even know what it would mean to win. It would be amazing and it would give me confidence that I’m on the right track to get to where I want to be.”

It’s no surprise Gorman finds herself ahead of plan, her steely determination and drive to succeed is evident in everything she says – and more importantly does – and if Monday isn’t to be her date with G1 destiny, it’s unlikely she’ll have to wait long.

“I didn’t have any choice when I bought the property four years ago. I had to make it work!” Kate said.

“People have told me I’m mad; that I’m too ambitious and too driven, but I don’t believe in failure.

“My two kids, Riley, 11, and Maddison, 9, love it too. Riley likes counting the prizemoney and Maddison watches the replays and knows all the times. She told me she’ll be my boss in 10 years!

“I’ve got brilliant staff and some very loyal owners. Jack Savaglia, who owns Mirror Illusion, has been a great support for my business. He’s had a lot of racehorses and now he’s in a G1 greyhound final!”

Gorman is also enjoying success with the promising Aston Dee Bee x Mia Tesoro litter, bred and raced by Robert Pallotta, including One’s Obsession, which claimed his fourth win from eight starts at Warragul on Tuesday.

The Hume Cup will be supported on Monday night by the G3 RSN Silver Bullet, to run at 8.32pm.

The hottest trainer in the land, David Geall, who also claimed a Cranbourne Cup heat double on Friday, demonstrated he’s just as adept in distance events when Bounce Back was an all-the-way winner of heat four.

Runner-up to Zipping Rambo in the G3 Racecallers Speed Star (595m) at Sandown and a finalist in the G2 McKenna Memorial, Bounce Back ($4.30) speared out from Box 5 and kept going strongly in 34.46sec.

Jeff Britton’s Mepunga Warrior ($1.90), runner-up in the G3 Speed Star (600m) at The Meadows in August, and a G2 McKenna Memorial and Warrnambool Cup finalist, finished strongly to take out heat five in 34.55sec.