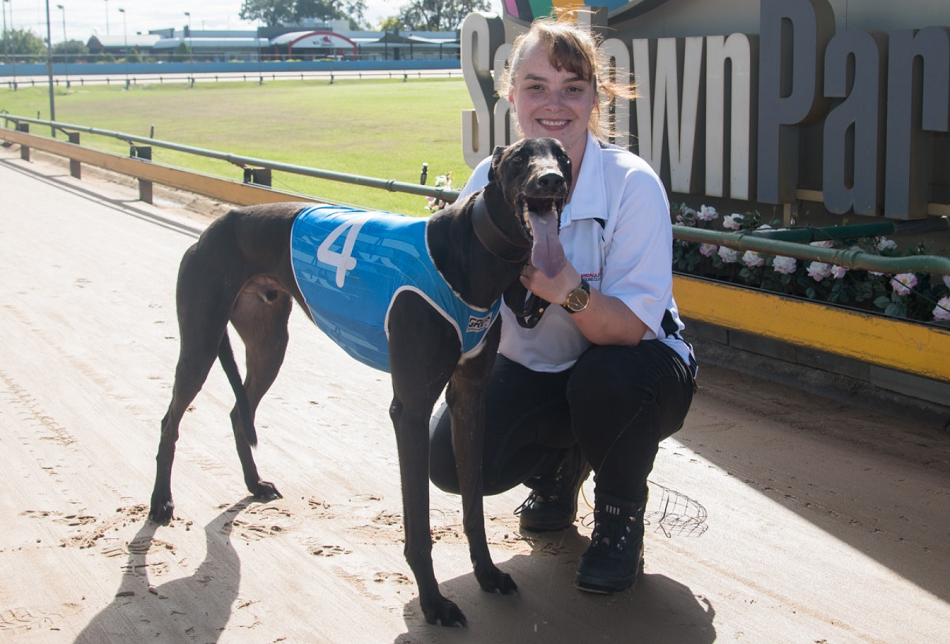 On Sunday, the hugely talented son of Walk Hard rocketed around Sandown Park in a spectacular 29.12 – the second fastest time posted at the venue this year.

“When he ran 29.23 at Sandown previously I could hardly believe it and yesterday’s run left me stunned. And his run home was 10.45 – the whole effort was mind-boggling really.”

Lithgow plans to use the next few weeks getting her star sprinter well acquainted with both city tracks, resisting the temptation to chase the richer spoils on the offing in the Perth Cup and Ballarat Cup.

“Perth is definitely off the cards and we’ll likely miss Ballarat as well,” Lithgow said.

“Even the 450m is a bit sharp for him now – if anything he’s looking for further. There’s some big races coming up in May so we’ll focus on the city for now. He hasn’t even trialled at The Meadows let alone raced so that will be the next box to tick with him.”

Last Thursday the pair put to bed a positive swab charge to Pentobarbitone which emanated from a batch of contaminated meat early last year.

“It’s going to be a long month for Sean but it will be over before he knows it hopefully,” Mel said.

“We were expecting a fine as opposed to a suspension but thankfully it’s worked out how it has. Mine was wholly suspended because I wasn’t made aware of Sean’s (positive) swab before mine was taken.

“Had I known we would have changed our meat supply immediately. It’s disappointing but it’s just good to have it finalised and move on.”

To salute in Thursday night’s Easter Gift Gotham Duke will need to overcome a terrific field of well credentialed sprinters.

“He just needs to improve that first section a bit as he gets up in grade in the city,” Lithgow said.

“But if he gets a clear run we’ll get a chance to see what sort of time he can run on Thursday night.

“He’s a dog that just thrives on competition and finds another gear when pushed.

At Ballarat on Monday, Dream Wizard, a brother to Gotham Duke, secured his 15th career victory for Lithgow with a gritty 25.01 success over the 450 metre journey.