MEPUNGA Ruby finally broke through at group 1 level by claiming the Fanta Bale Super Stayers at The Meadows on Saturday night. 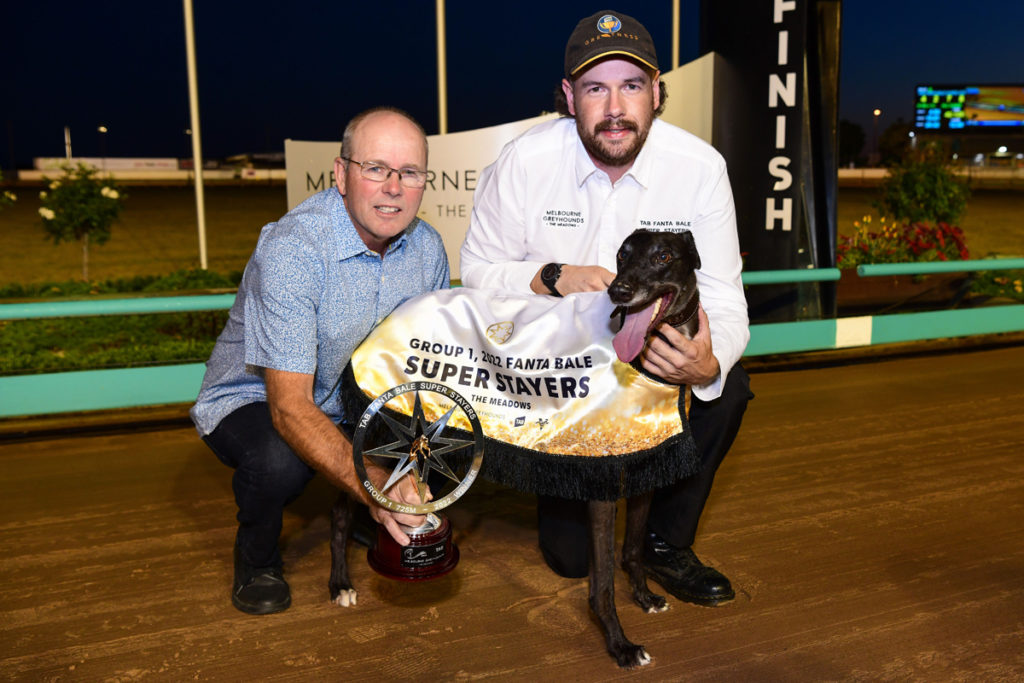 MEPUNGA Ruby finally broke through at group 1 level by claiming the Fanta Bale Super Stayers at The Meadows on Saturday night.

Sent out favourite for the $100,000-to-the-winner event, Mepunga Ruby began cleanly from box 4 to sit behind early leader Fernando’s Quest as the pair cleared away from the chasing pack with a lap to go. Mepunga Ruby took the lead entering the back straight and assumed control of the race to claim victory by almost nine lengths in 42.13.

“We finally got there,” said trainer Jeff Britton.

“She’s put in some pretty good runs, just never done it on the right night. It’s always in the back of your mind, when they keep starting as favourite and keep on getting beat. It’s just good to win one.”

With a number of favoured runners knocked out in the heats, Mepunga Ruby was one of the few finalists with experience at group level. She entered the Meadows carnival on the back of an impressive group 2 victory at Wentworth Park, but despite her obvious class advantage, Britton was not particularly confident entering last night’s final.

“She had three weeks off from Wentworth Park. I thought that would freshen her up and it didn’t seem to work. I just gave her the one trial in between then straight into the Zoom Top and she went ordinary, ran straight into Hank The Hustler.

“Going on the last two weeks, she went 5.06 in the heats and the week before she went worse. I just looked at all the speed in the race and thought she’d get to the first corner about fifth if she did what she had been doing.

“But she began a lot better and got left a lot of room.”

And that, according to Britton, was the key to her breaking Bobby Boucheau’s 11 year old race record.

“She’s done that a couple of times now, running pretty fast times. She ran 42.28 in a three-dog field at the Meadows, and at Wentworth Park she flew around there as well. It’s there, she just needs to be clear around the first corner without too much trouble.”

Given her previous success at Wentworth Park, Britton confirmed that the group 1 Association Cup at Easter is a target for the daughter of Fernando Bale, however he is not ruling out a tilt at the upcoming Galaxy at Cannington as well, a race his sister Linda has won five times and brother Robert three times.

“She seems to have pulled up pretty well so will have a look at the dates and make sure things aren’t too close.

“There’s a lot of races coming up after that – the Association Cup, the Sandown Cup and the race in Newcastle, so I just want to have a look at all the dates.”