QUEENSLANDER Graham Hall has been riding a wave of emotions in the lead-up to Saturday night's running of The Phoenix at The Meadows. 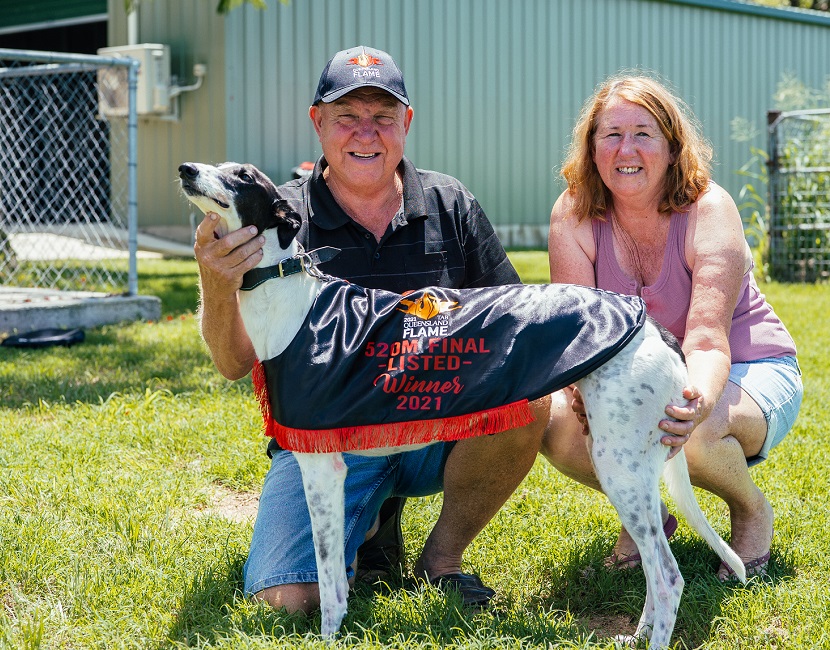 QUEENSLANDER Graham Hall has been riding a wave of emotions in the lead-up to Saturday night’s inaugural running of The TAB Phoenix at The Meadows.

Hall has Spotted Elk in the $750,000-to-the-winner showpiece, the prolific winning sprinter securing her place as Racing Queensland’s representative with a thrilling Queensland Flame triumph at Albion Park on December 2.

At last Sunday’s all important box draw the enormity of the occasion began to dawn on Hall, the former police officer being swept up in the emotion of “the once in a lifetime experience”.

“Yes it was an emotional day for me,” Hall said.

“It dawned on me as the day went on in the countdown to the box draw that this was something that will unlikely happen again, a once in a lifetime experience.

“But I also realised after watching replays of all the finalists that our chance in the race hinged on drawing as close to the rails as possible.”

Handed the third opportunity to choose a box for the $1.145m Phoenix Hall made a beeline for box three and was beaming.

“One or two would have been better but three is next best,” Hall added.

“I needed to be as close to the rails as possible and certainly inside some of the other finalists. And that has happened.”

When Spotted Elk steps out as the pride of Queensland in Saturday’s The Phoenix, she will be carrying the hopes of community partner Palm Beach Currumbin Cricket Club and owner for a day Mathew Cassimatis.

What a run 👏🏻 Spotted Elk wins the inaugural @tabcomau Queensland Flame at @BrisGreys for trainer Graham Hall, officially booking herself a spot to represent Queensland in the upcoming $1.145 Million TAB Phoenix! 🐶 #QLDisRacing pic.twitter.com/wJGTprpjBo

And on the strength of two polished trials at The Meadows, Hall is confident his 16-time winner is primed to run the race of her life.

“Tom Tzouvelis warned me before we left home that she would need a couple of looks at the track,” he said.

“After her first trial at The Meadows I was ready to pack up and head home.

“But on Monday she went much better, spearing out to run a 4.99 first section.

“Her overall time of 30.33 was not exceptional but there is more improvement in her for the race.

“And that first section certainly puts her right into it.”

A sub five second first section at The Meadows is “humming” and few of the finalists in The Phoenix can match that.

“Koblenz, of course, can reel off a sub five second first section but he will have to do it coming across from the eight box,” said Hall.

“I’m hoping Spotted Elk can repeat that first section and give herself a chance of being right in the race from then on.”

Hall said his biggest concern is Jungle Deuce being drawn inside Spotted Elk.

“He doesn’t always jump, but when he draws over near the rails, he can improve his box manners,” said Hall.

Looming large in The Phoenix preparations is the fact hot favourite, Aston Rupee, which went to Shepparton on Monday and trialled under the track record.

“He’s a monster of a greyhound,” said Hall. “If the gate opens for him at any stage in the race, he will just blow us all away.

“But, racing is a funny game as everyone knows and anything can happen on the night.

“We are just thrilled to be there and be representing Queensland.”