A brilliant trial at Cannington on Tuesday has solidified Good Odds Harada’s standing as one of the major chances in Saturday's National Sprint Grand Final.

A brilliant box-to-box trial at Cannington on Tuesday has solidified Good Odds Harada’s standing as one of the major chances in Saturday night’s Group 1 Crocmedia National Sprint Grand Final (520m).

On a night where a list of Nationals’ hopefuls acquainted themselves with Cannington for the first time, it was the Frank Hurst-trained Good Odds Harada that stole the show, the NSW representative tearing up the clock, posting mind-boggling sectionals of 5.37, 13.52 and 18.11.

“It’s pretty hard to say that he didn’t handle the track running times like that … he has to have, he looked to get around great,” declared Hurst on Thursday.

“We came over from Sydney last Saturday and it was lucky we did. The dog lost about a kilo on the trip over so we needed a few days to get the weight back on him.

“The trip ends up being a good eight hours when you include everything before and after; it’s lucky we came when we did or we might have been going home early!”

Winner at 14 of his 35 starts, Good Odds Harada booked his trip to Perth with an ‘upside down’ NSW Sprint Final victory on August 8, the noted front-runner, blessed with searing speed, coming from well off the pace to score in 29.87.

“The way he won did surprise me; it was the best run of his career in my eyes – even better than his (near record) Gosford win,” Hurst added.

“When he missed it like he did off the red and was back in the pack I went looking for his brother (Good Odds Buddy) … Buddy went the rails and then I saw Good Odds Harada sweep around down the outside. It did surprise me.”

Winner of the Group 3 Bob Payne Sprint Final (520m) at Wentworth Park in May running an electrifying 29.58, Hurst insists the best is yet to come for his hugely talented galloper, ideally starting with group 1 glory in Saturday night’s National Sprint Grand Final.

“I don’t get into the form that much, I just worry about my own dogs, but the draw doesn’t look that bad – put it this way the three is better than five or six,” explained Hurst.

Local hopes Premium Share and Campini, the latter gaining a start as second reserve, are on the third line of betting at $5.00 apiece.

For Londonderry based Hurst – who guided former top flight sprinter Zulu Zeus to third behind Xylia Allen in the 2013 National Sprint Grand Final at The Meadows – he goes into Saturday night’s finale confident his charge is tuned to the minute.

“It’s hard to say he can improve off the sections he ran on Tuesday but I hope he can – he should hold his line from box three early and get every chance,” Hurst said.

“When he was younger he’d improve off a run at the track but as he’s got older with more experience he’s taking it all in his stride and handling things first go.

“We are staying over here with Eric Campana and the dog’s settled right great, he’s getting spoilt rotten, even more so after Tuesday!”

Good Odds Harada is one of three chasers Hurst has in his care from the famed April ‘17 Collision x Solar Pak litter, including Wagga Cup winner and track record holder Good Odds Buddy, and Good Odds Megan, winner at 10 of her 28 starts.

“It was a bit of a fluke that I came to get them in the first place but I’m glad I did,” added Hurst.

“Good Odds Angel was due to be mated with Collision and when that didn’t happen the first time we didn’t have anything coming through so I bought some pups out of Solar Pak knowing that her first litter (to Fernando Bale) went very well.

“When I started educating my four they were running 18.60 at Richmond over the 330 as pups and I was thinking to myself … what have I got here? There wasn’t much between them.

“They’ve been up for a while now but it’s hard to give them a good spell when all these good races keep coming around, at the moment Tracey and I just try to give them 10 days here and 10 days there.

“Good Odds Harada’s going as good as ever so hopefully that continues on Saturday night. Everything’s gone to plan … so far.”

* Pawnote: Good Odds Buddy has drawn box one in the opening heat of the Group 2 Sires On Ice Black Top at Ladbrokes Gardens on Friday night 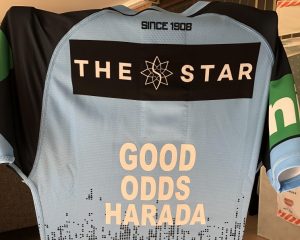