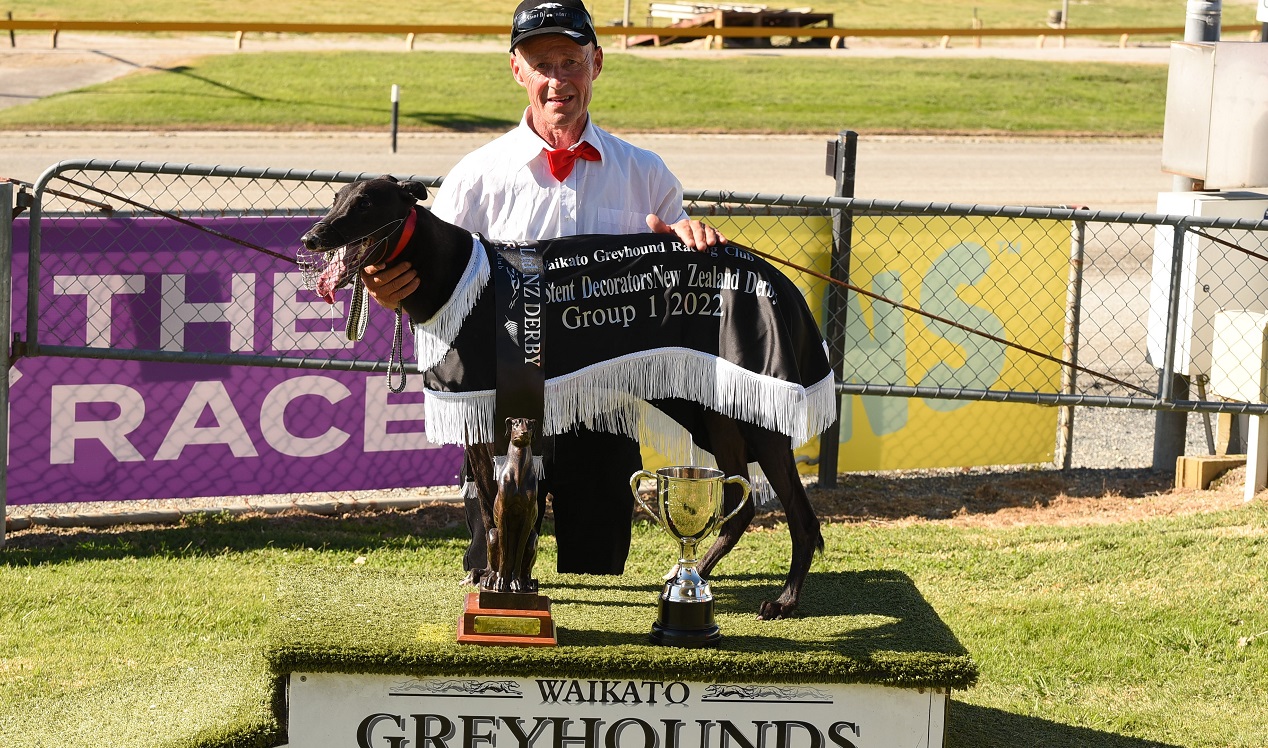 Exactly a decade later Mini’s Fantasy’s grandson seized the Cambridge Raceway rail and dug in deeply to strongly repel all challengers to land his biggest career win in just his 11th race-day start.

It was a polished performance by the inexperienced chaser, especially after dual Group 1 winner Opawa Superstar bounced into the early race lead for his prolific Group race winning trainers Dave and Jean Fahey.

Diego Jem displayed sharp pace, railing up underneath to take over the pacesetting duties which ultimately translated into his three-quarter length victory, completing his 457m assignment in 25.52s.

Opawa Superstar surged home for his second, while the winner’s kennelmate Master Porthos made it a fantastic result for Hart when he kicked on stoutly to nail third.

“This win is dedicated to Ray (Adcock) – we have followed his training philosophies and principles,” expressed Hart about the doyen of Kiwi conditioners and his longtime mate.

“For us to breed and rear Diego Jem from a line started by Ray is simply awesome,” he added about the son of Fabregas and Jemima Tee who landed his eighth career win.

Adcock was adamant that Mini’s Fantasy (Premier Fantasy – Miss Mini Mouse) would produce high class greyhounds. He had recognized the Bartello bloodlines and wanted to tap into those lines.

A solid succession of winners flowed from the resultant progeny, with many of them being successfully raced by kennel client Jose Arthur, ably supported by her husband Donald. That line is destined to continue for the Canterbury based participants.

“We had some early minor issues with Diego Jem, which is why we initially restricted him to (short course) sprinting. He confirmed his potential when he ran an Addington 295m class record.

“We will look at stepping him up to 520m racing at Addington now,” Hart suggested.

It was a huge afternoon of premier racing action at Cambridge last Thursday where in addition to the NZ Derby, three other $20,000 Group 2 finals was decided.

Yep, the Mini’s Fantasy blood was again to the fore, with Charlotte Lu also being a grand-daughter being out of Tee Time (by Fabregas). She completed her 457m task in 25.74s.

The staying feature over 747m was turned into another procession by the dominant stayer Know Keeper.

The Garry Cleeve mentored stayer cruised through his assignment in 42.92s to effortlessly add to his unbeaten staying record with this now being his 13th over the longer distances.

Interest now focuses on when Cleeve plans to make his much anticipated staying campaign with Know Keeper across the ditch.