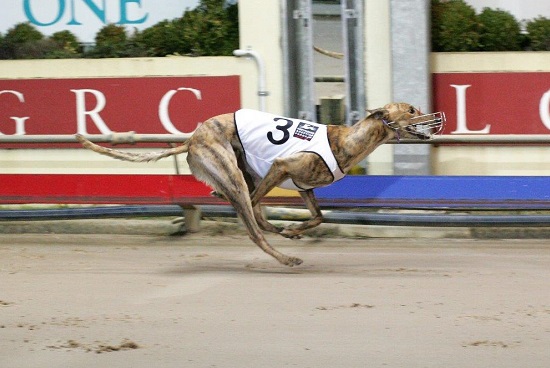 “Ted wins everything so hopefully the little guy can get one up on him this time,” chuckled Higgins leading into Thursday night’s Hobart program.

Manners Matter – a daughter of Blazin’ Bomber – has drawn box one for Thursday night’s Surepick Grade 6 Stake over the 340m, while Mr. Camacho has drawn out in box eight.

Early markets can’t separate the two at $2.20 apiece, with each of the remaining runners quoted double figure odds.

“Manners Matter has good zip and wants the fence but Ted’s dog is going to be very hard to beat, they always are,” Higgins added.

“Being realistic if Mr. Camacho was in one and Manners Matter was in eight Ted’s dog would be a moral but the one box gives us a good hope … she generally begins well, she’ll give herself every chance.”

A stylish maiden winner at Launceston over the 278-metres early last month in a slick best of meeting 16.26, Manners Matter goes into Thursday night’s Hobart assignment chasing her first win at the circuit, finishing runner-up at each of her two previous appearances.

“She should have actually gone even quicker at Launceston in that win, a dog ran her up the track. When I was breaking her in she was only going steady but she’s just kept gradually improving. She’s got her box, now she just needs to use it.”

Higgins ventures to Hobart this Thursday night with three runners, the first of those Gershwin Rhythm, lining up in race one from box six over the 340m.

“She’s probably around 50/1 but she’s a sneaky place chance for anyone throwing a few dollars on,” Higgins said.

“She’s a sister to Manners Matter and is around three months behind where she’s at … she goes better than her form looks so hopefully she can run an improved race.”

“Whether he’ll back it up and do it again is anyone’s guess, you’d have to get inside his head to find that out!

“He’s got the ability but he’s up in grade now after winning last week. He’s capable, it’s just up to him.”