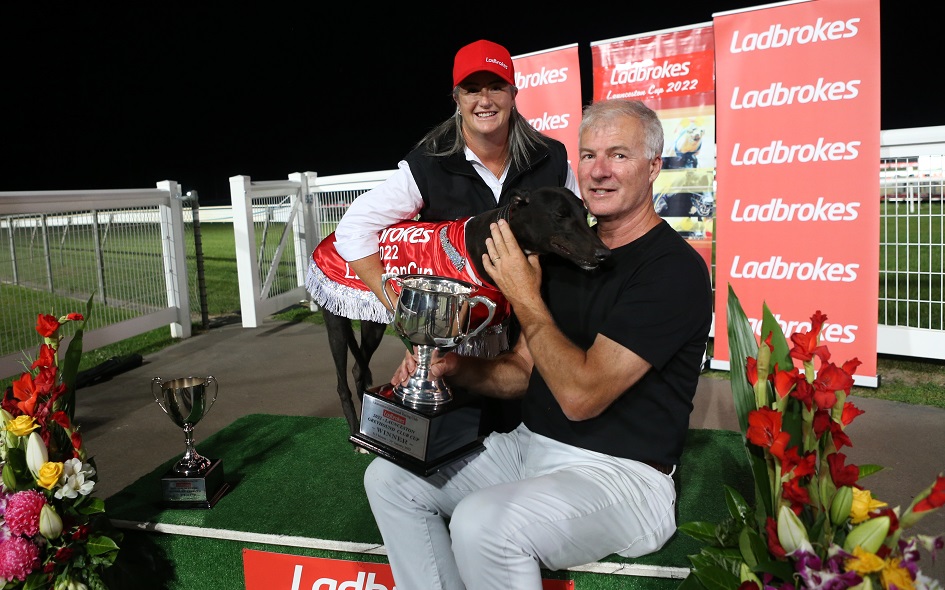 Trained by David Geall and owned by his wife Rose, the regally-bred son of Fernando Bale and Up Hill Jill soon put his rivals under pressure in the $40,000-to-the-winner decider, bossing proceedings after a fluent exit from the boxes.

Heading towards the rail in the bustling dash approaching the first turn, Hill Top Jack’s good box manners and solid pace afforded him the luxury of a clear path through and connections never looked back thereafter as he kept up a searing gallop throughout to fend off all challenges.

The black sprinter covered the 515-metre trip clocking a slick 29.45 for the outstanding career-best gallop, notching up his 18th win from 48 starts with $107,860 in prizemoney, defeating the fast finishing Loch And Loaded by almost four lengths with King Of Calypso coming home strongly to run third.

“A great effort, he’s a terrific chaser and we were afforded the opportunity with a perfect box draw,” said Geall.

“We’ve being trying over the years to win either a Hobart Thousand, Devonport Chase or Launceston Cup and when everything comes your way it’s something you can’t make any mistakes with. Hill Top Jack ticked all the right boxes and deserves to claim a big race, while the trip away from home seems to have been a benefit.”

David Geall will look to fly Hill Top Jack back home and then map out a plan towards another racing campaign.

“A massive credit goes to Nathan and Susan (Gittus) for their help, Susan has done such a tremendous job as always with both Hill Top Jack and all our chasers we’ve been fortunate to place in her kennel,” David added.

Upon reflection of Hill Top Jack’s top performance in the Group 2 Ladbrokes Launceston, Geall gave credit to former champion chaser Up Hill Jill which continues to throw class in her offspring having won $1,061,280 in prize money.

“Up Hill Jill was an incredible greyhound during racing career and has carried on her efforts in the breeding barn,” Geall said.

“Rose and I have been fortunate to have bred and reared our greyhounds and to have such honest chasers like Koblenz (2021 Melbourne Cup winner), Rosie Posie and Hill Top Jack, gives us a real great thrill, when you do the all pre-education and breaking-in it gives you a rewarding feeling to get these big race results.”