Dream Start: Holly's Training Post Off To A Flyer 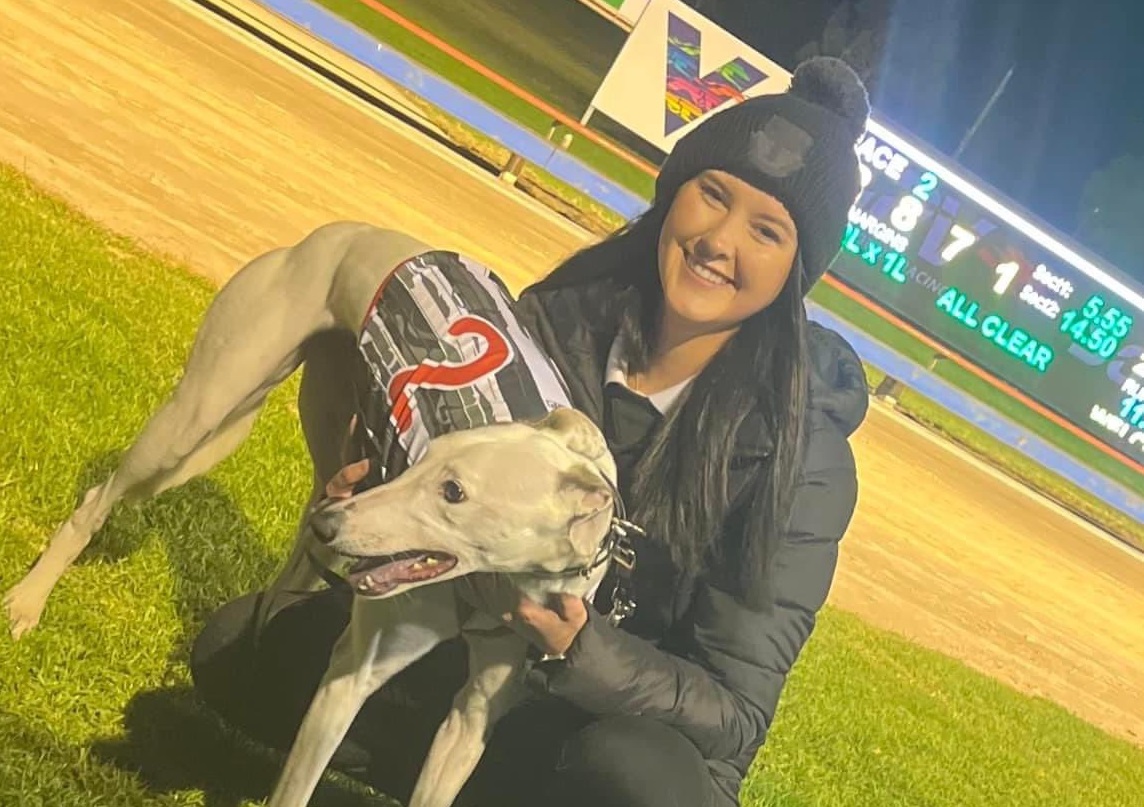 Lakeview Patsy was sent to the boxes a $2.50 favourite on debut and despite getting squeezed early, raced away from her rivals to give the 18-year-old a memorable maiden win.

“It feels pretty good, but it hasn’t sunk in yet,” Holly said.

“It was a really good run. She got squashed in at the start and I was a bit worried, but she’s a good chaser. I’m happy with that.”

Daughter of Melbourne Cup winning trainers Jason and Seona Thompson, Holly gained her trainers licence soon after turning 18 in late 2021 but it wasn’t until her move to the Gippsland town of Metung with partner Luke Whelan that she had her first starter.

“I kept begging mum and dad to give me a dog and they never did,” she joked.

“Luke asked me which ones I liked, and I said ‘I like Patsy, she was my favourite and was a bit of a standout. She’s a funny shaped girl, she has a really tiny head and a stockier body. She’s the only one that doesn’t walk on the walking machine. Everyone goes on there and she just goes to bed. She’s got a beautiful nature.

“And I said I don’t mind Lottie and I like Lakeview Jet. He said, ‘alright you can put them in your name.’ I was a bit excited when they told me that.”

Lakeview Lottie was the first of the three to make her debut, running an unlucky second at Sale last Sunday.

After that meeting, Patsy trialled for the first time over the 440m trip and turned in a performance that gave Thompson confidence ahead of her debut on Wednesday evening.

“I was pretty confident. I looked at the field today, the only one I didn’t know anything about was the one (Worker Bee) which was a first starter as well.

“I knew how Patsy goes – she trialled at Sale on Sunday night in the pouring rain at her first look over the 440m and went 25.20. I was pretty happy with that, so I thought she was a real good chance.”

The Thompsons are a close-knit family, so it was no surprise that mum Seona was one of the first to send her congratulations.

Holly was particularly excited to ‘get one over’ her brother Luke, who works for his parents at Awesome Lodge, handling some of the premier chasers in the land but is yet to take his own license.

“When I go back home Luke would keep asking me ‘how are they going’ and I’d say ‘they seem alright’. I told him Patsy is my favourite and she does go alright, so no doubt Luke watched.

“I’ve got something over Luke now, he’ll never hear the end of it!”

With her first win under her belt and with a promising pup in her care, Thompson is already eyeing a trip to the city.

“She has trialled at Sandown a couple of times and has run good times there, so I will probably go there next now that she’s broken her maiden.”