EARLY education reports are tipping that former star galloper Feral Franky is poised to make the grade as a stud dog with interest heightening. 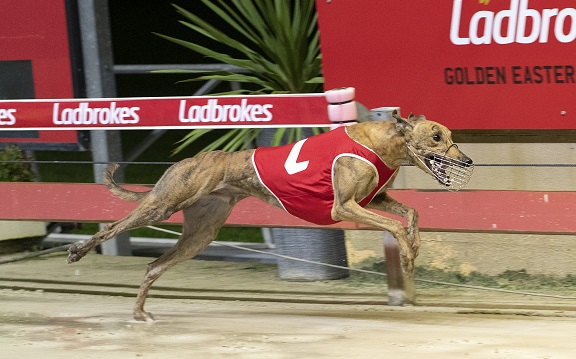 EARLY education reports are tipping former star galloper Feral Franky is on track to make the grade as a stud dog.

Southern Highlands breeder John Mellon says he recommends Feral Franky (Collision-Solar Pak) to anyone who will listen on the strength of reports on a litter out of Mellcat Lass, winner of the 2017 Dapto Puppy Auction Sprint.

“Grant Fullerton has broken them in and is raving about the three we sent him, two dogs and a bitch,” Mellon said.

“But I’m always one to wait until they have a preparation and start racing before wrapping them too much.

“At this stage I’m happy to recommend Feral Franky to anyone.”

Mellcat Lass produced three dogs and two bitches in the litter, her first, and Mellon sold a dog and bitch.

“From day one this litter looked real good,” he said. “They have a beautiful conformation.”

Mellon has created an intensely in-bred pedigree by putting Mellcat Lass to Feral Franky. They have a 2×3 of the half relations Collision and Spiritual Rumble, and a 3×2 of the virtual sisters Tifi and Miss Tandur.

“I purposely did that knowing that close in-breeding is a great way to get a superstar,” he said.

The son of Raw Ability and Mellcat Magic has won six of his 11 starts including an at the time 24.28 track record run at Goulburn over the 440 metres.