STAR bitch Immunity is on the comeback trail and leading trainer Jason Thompson has Group 1 glory in the Sapphire Crown in his sights. 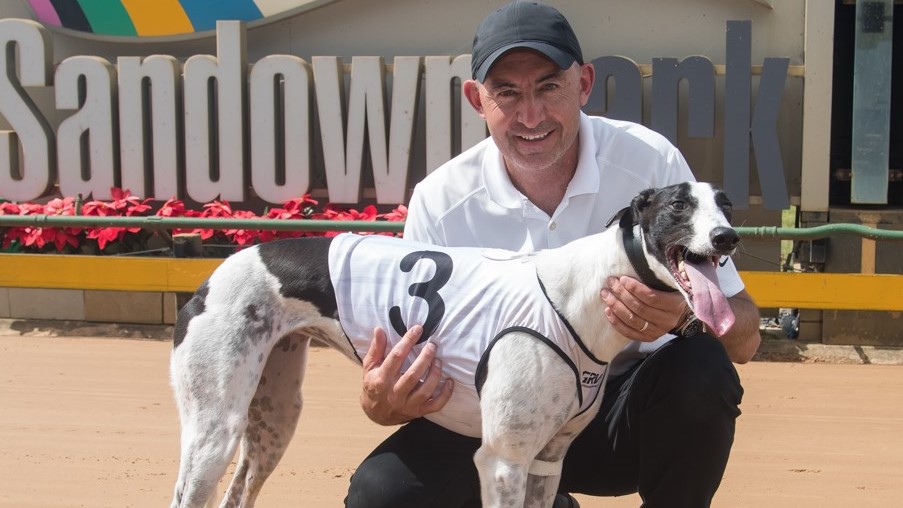 IMMUNITY is on the comeback trail and trainer Jason Thompson has Group 1 glory in his sights.

A half sister to dual Group 1 winner Black Opium, Immunity resumes from a four month spell in race eight at Ballarat on Wednesday night and Thompson is delighted with how she’s returned.

“She hasn’t lost anything,” he said.

“She’s come back as good as what she was. She’ll need those first few races back as any dog would after four months off to tune up and get back into race mode again, but on the trials she’s had she’s lost nothing.

“I’m looking forward to getting her back, she’s going really well.”

Immunity burst onto the scene almost 12 months ago, winning her first six starts and running a slashing 29.13 at her Sandown Park debut – the fastest time by a female sprinter in 2020 – and entered the 2020 TAB Melbourne Cup as one of the leading contenders.

After running third in her Cup heat behind Tiggerlong Tonk – running the eighth fastest time of the night – she was set for the Group 2 Laurels where she ran a disappointing fifth after being sent out the $1.30 favourite.

She’s been on the sidelines since.

“She had a season straight after the Laurels and I reckon she might have been coming on without showing it because her run in the final was really ordinary. It was probably the worst run of her career to be honest.

“She’s had a good break and had a handful of trials. All going well she’ll race Wednesday and another run the following week then get a trial at Sandown leading into the Sapphire Crown.

Thompson is a two time winner of the country’s richest race for female greyhounds, claiming the Group 1 with Peggy May in 2012 and with Black Opium in 2020.

It was Black Opium’s first Group 1 victory after finishing runner up on three occasions at group 1 level so it would be fitting for her little sister to break through in the same race 12 months later.

Despite being off the racing scene for over five months, Immunity has been solid $8 second favourite for the Sapphire Crown since markets opened in February.

“We knew when she came on season we knew she’d need four months off and we actually had a look when the Sapphire was and aimed to have her back for it, purely because of Black Opium winning it the year before. It was always the plan to get her ready for it and fortunately things have gone to plan.”

While Immunity shapes as Thompson’s leading Sapphire Crown contender, he also has 2020 runner-up Aston Silk ($18) and Aston Oriental ($18) set for the series with Thompson particularly keen on the latter’s potential.

“I have a massive opinion of her. At her last start at Sandown she hit the running rail, but she’s back in at Sandown on Thursday (race 9) and she’ll be definitely aimed at the Sapphire,” he added.

“She has a heap of ability – I think she may end up being a 600m bitch and may even get 700m down the track – but I just think she’ll be a nice one for the Sapphire as well, I really like her.”

Thursday’s card shapes as an intriguing night of racing. Zipping Rambo will jump from box one in race six after running within half a length of Dyna Double One’s long standing 595m track record at his last visit to the venue three weeks ago, while the enigmatic Captain Dynamite resumes over 715m after a 10 week break with an eye to the world’s premier distance race, the $250,000 RSN Sandown Cup.