IRISH star Explosive Boy is headed to Australia for stud duties but he has a Group 1 Irish Derby to secure first which continues this weekend. 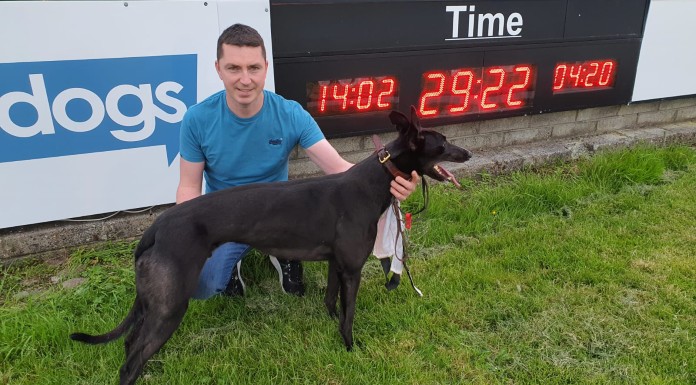 But in the meantime the multiple Group winner and track record breaker has the coveted Group 1 Irish Derby to win. The Derby final will be run on September 18.

He is unbeaten in the first two rounds and goes into the third round at Shelbourne Park in Dublin on Saturday night as hot favourite to win against a cracking field in the third round of the Derby.

Paul and Michelle Westerveld will get the dog to stand at Meticulous Lodge alongside Fernando Bale, Fabregas and Orson Allen when he eventually retires for Aussie owner Peter Sutcliffe.

“Peter bought our Devon Meadows property a few years ago and we have obviously stayed in touch ever since,” Paul said.

“I was at Sandown a while ago and Peter told me he had a hot youngster in Ireland who could be anything on the track and eventually a stud dog.

“I didn’t know anything about the dog but warned Peter he would need to win a Group 1 and run a track record to become a stud dog.

“Well, that’s exactly what he has done since and here he is now the best dog in Ireland.”

Explosive Boy has also been a finalist in the Group 1 Kirby Memorial and Group 1 National Puppy.

The dog is trained by school teacher, but astute dog man, Patrick Guilfoyle.

Westerveld said vaccinations would be done and semen collected from Explosive Boy after the Irish Derby  and sent to Australia, just in time for Australia’s spring breeding season.

“The timing of his arrival in Australia depends on how he goes through the rest of the Irish Derby series,” Paul added.

“He’s a rocket,” said Westerveld of Explosive Boy. “He runs a strong 500 metres but he is one of those brilliant box dogs. He ticks every box to become a stud dog in Australia.”

No service fee has been settled on for the dog as yet.

While Irish bred, he is saturated with Aussie bloodlines which will allow local broodbitch owners to line breed successfully to him. His pedigree brings in such Aussie greats as Where’s Pedro, Top Honcho, Brett Lee and Surf Lorian.

His sire Good News won the Irish Derby in 2017 and is now among the best stud dogs in Ireland. He was also placed at Group 1 level and a finalist in two other Group 1s and two Group 2s.