JEPARA continued his emergence as a top grade sprinter with a thrilling victory in the opening Gr8 Eight at Sandown Park on Thursday night. 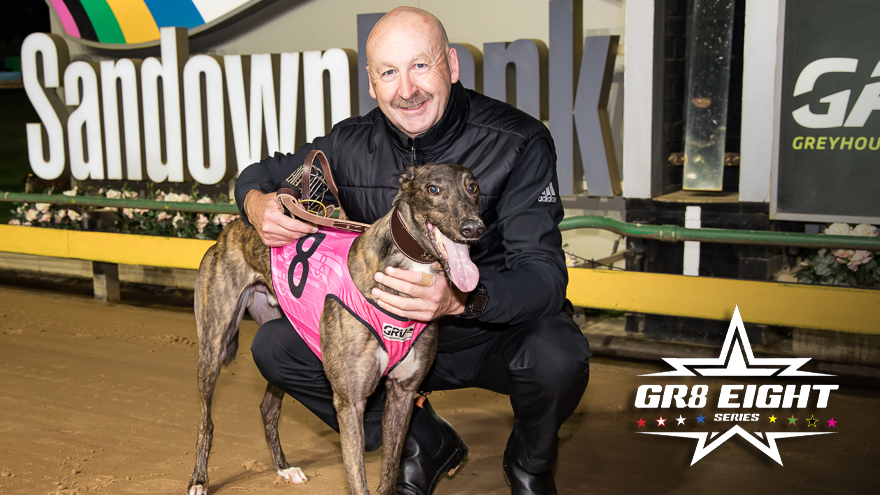 JEPARA continued his emergence as a top grade sprinter with a thrilling victory in the opening Gr8 Eight at Sandown Park on Thursday night.

Providence Bale started a narrow favourite for the $21,000 race despite being run down by Jepara in their previous meeting, and like the result five days earlier, Providence Bale again led the field into the home straight before Jepara swept home to claim an impressive victory in 29.54.

“He jumped well and gave himself a bit of room out wide and sat on the back of them. We thought he he’d be strong late,” said handler Mark Johnson on behalf of trainer Angela Langton.

The win was his second Gr8 Eight victory this month and 14th of his career, taking his prize money beyond $110,000. Importantly, it was the first time he’s strung consecutive victories together since winning his first three starts in September last year.

“Jeff (Britton) and Angela have a bit of confidence in him, and that’s been a big thing to get him some confidence and keep working through the grades,” continued Johnson.

“They have some races picked out for him which is great.”

Jepara has now won over $110,000 in prize money from his 38 career starts and will be one of the leading contenders in the upcoming group 1 Maturity at The Meadows in July.

Zipping Rambo was sent to the boxes the odds on favourite and began cleanly behind early leader Whatever I Say before assuming the lead with a lap to run. Hank The Hustler settled third but failed to make an impression on the lead until they approached the home turn where he swept wide and nabbed Zipping Rambo in the final stride.

“It looked like he missed it a little bit at the start and found himself sitting third, but he does come from behind too,” said handler Harrison Goss, deputising for trainer Jeff Britton.

Hank The Hustler has run the fastest time over 715m at Sandown in 2021 (41.38). He had no luck in his RSN Sandown Cup heat but bounced back to claim the Listed Cup Night Stayers a week later in a time that was two lengths faster than Zipping Rambo’s Cup winning gallop, and his victory in the Gr8 Eight was his fifth from nine starts over Sandown’s ‘half-mile’. Still three months shy of his third birthday, connections are excited by what is in store for the South Australian.

“He hit bit of a purple patch when he ran that real quick time. Obviously Zipping Rambo won the best staying race in the country and he ran him down on the line. It looks like he’ll have a pretty good 6-12 months ahead of him.”