THE decision to reject a good sized offer for Kip Keeping went a long way to being vindicated after he saluted in Sunday’s Ned Whisky Gold Maiden. 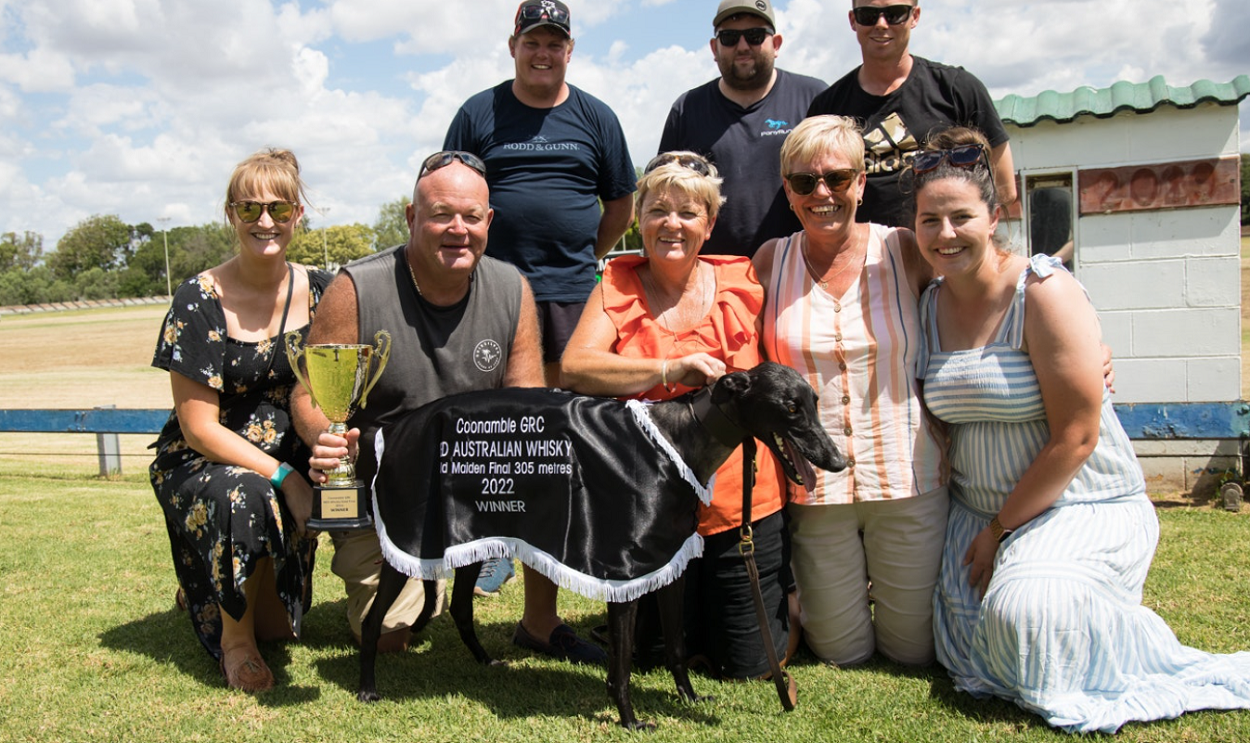 THE decision by Charmaine Roberts and Shayne Stiff to reject a good sized offer for Kip Keeping went a long way to being vindicated after the talented youngster saluted in Sunday’s Ned Whisky Gold Maiden Final (305m) at Coonamble.

The 17-month old son of Fernando Bale and Black Top winner Caitlyn Keeping claimed the $12,000-to-the-winner feature in a slick 17.61 after winning his heat 48 hours earlier in a fast 17.53.

Kip Keeping was broken-in for Roberts and Stiff by Peter Sims with the regally bred youngster returning home with very good reports.

“I didn’t like him much as a pup to be honest but Peter (Sims) broke him in and offered us $25,000 when he’d finished straight off the bat,” Stiff said.

“This litter was the first Peter had broken in for us so we didn’t really have much of a guide so we decided to bring him home, if I hadn’t Charmaine would have killed me!

“He’s only 28 kilos but he’s a really good little race dog. Being so young you’d still expect there to be plenty of improvement so where he gets too we’ll just have to wait and see.

“But things have started on the right note.”

“She was actually the main reason we went for the carnival,” Stiff said.

“Taking the maidens was a bit of a last minute decision.

“Ruby Keeping hadn’t been handling the travel to Wentworth Park all that well so we thought this race was a nice option for her to change things up.

“She earned $4,000 by winning the Coonamble Cup which is great money when you’re not losing a city win for it.”

Ruby Keeping, a daughter of Superior Panama and Shelley Keeping, has now won six of her seven career starts for $21,000 in prize money.

Stiff was full of praise for the hard working Coonamble committee which again produced the track and amenities in superb order.

“They do a sensational job,” Stiff said.

“The carnival obviously wasn’t like we’ve come to expect in October but that’s understandable.

“The people there still had a great time with a smile on their face and we’ll be back for sure when the carnival returns to its usual spot this October.”

On a monster card of racing action on Sunday, the Ned Australian Whisky Silver Maiden Final (305m) was taken out by the Garry Gibson-trained State My Mate in 17.83.

The Ned Australian Whisky Bronze Maiden Final (305m) was landed by Go Forward Daisy for Adam Campton in 17.72 which gained a run off the reserve bench.