Fernando Frank, trained by Knocker, is $5.50 with TAB from Box 6 in the second heat, while Fernando Cazz, trained by Knocker’s daughter Kayla Cottrell and winner of the G1 Rookie Rebel invitational in February over the Hume Cup course, is $2.70 favourite from Box 7 in the third run-off.

Knocker has done a wonderful job in transforming Fernando Frank since taking the well-bred son of Fernando Bale and Naughty Cazza on board in early 2021.

After winning only four of his first 31 starts, in 24 starts for the astute Peacedale trainer/educator, Fernando Frank has won eight from 24, with 13 minors, and missed a place only three times, for a career tally of 12 from 55.

Two of Fernando Frank’s unplaced efforts while in Knocker’s care have come in feature events, running sixth in the G2 McKenna Memorial (595m) at Sandown Park and fifth in the G3 Speed Star (600m) at The Meadows.

“He hasn’t put a foot wrong, he’s loving racing and keeps going from strength to strength.

“He’s really been a revelation. He’s so determined to get to the leader in his races and get past it. He just wants to run down dogs.

“I said to Kayla (daughter) that he reminds me of a bull, so I’ve nicknamed him Terry Jenkins after the darts player who’s called ‘The Bull’. He puts darts on his head like they’re horns!”

Earning a crack at G1 glory with four wins from his past five starts, Fernando Frank is on the third line of betting in heat two (race 5 at 7.57pm), with Kelly Bravo’s Paddy Wants Pats the $3.10 favourite from Box 1.

“I give the dog a chance,” said Knocker. 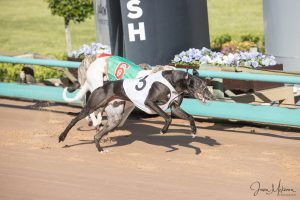 “If he can get into second or third with a clear run then he’ll be right. He’ll find his feet and away he goes.

“Put it this way, if I had to pick one of the two (Fernando Frank or Fernando Cazz) to qualify for the final it would be him.”

However, injury has restricted the winner of 11 from 36 starts to just three appearances since April.

“She came back from Sydney and led by four in a race at Sandown but struggled to finish fourth and Kayla rang me afterwards to say she was lame in a back leg,” Knocker explained.

“We had her x-rayed and she’d pulled the ligaments off the bone of a hock.

“She had six or eight weeks off and she’s come back good, don’t get me wrong, but I’d prefer for the Hume Cup heats to be in about a fortnights’ time.

“Ability-wise, yes, trials, yes, but Fernando Frank is up and about and has race fitness, so she’s just a bit behind him.”