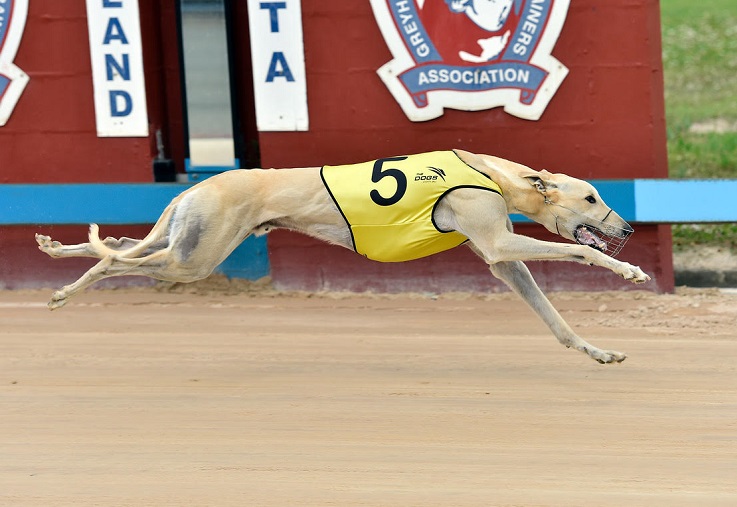 TRAINER Darryl Thomas has likened La Grand Quality’s steep rise in class for this Saturday night’s Group 2 Ballarat Cup heats to that of a park footballer being thrown straight into first grade.

“It’s a huge step up for him … it’s like he’s bypassed reserve grade and gone straight to first grade but I know what this dog can do,” Thomas said.

Winner at six of his 10 career starts, La Grand Quality, a son of El Grand Senor and All Quality, goes into Saturday night’s third Ballarat Cup heat in superb form.

“I gave him another slip around Ballarat this week to top him off and they tell me what he ran was as good as they go so he’s right to go for Saturday,” Thomas added.

“I’ve been away from home with him for over a week now so it’s a big gamble but I was talking to Anthony (Azzopardi) yesterday and he said to me if I want him to be the good dog I know he is he needs to race good dogs.

“We’re up against the big boys now so there’s no room for error; you just can’t afford to make mistakes in this class with so many good dogs. But he’s definitely up to it. No doubt.”

Drawn box six in what is a “stacked” third heat this Saturday night, TAB has installed La Grand Quality a $2.30 favourite ahead of Shepparton Cup winner Peter Galo at $3.60.

“He’s far too short at that price but I pray they’re right,” Thomas said.

“There’s probably 4 genuine winning chances and it will come down to which one does everything right on the night.

“I like box six for him … he just needs to come out and hold his line. I can’t believe there’s so many dogs that can win the final in his heat … I know there’s quite a few people not too happy about it.”

While Peter Galo is second in betting from box four, Seal The Deal (box one), Speed Star (box two) and Cee Jay’s Boy (box eight) are also quoted under double figure odds for by far the strongest heat.

Interestingly, Seal The Deal is one of five runners Anthony Azzopardi has engaged in Saturday night’s cup heats, with Thomas and La Grand Quality setting up camp at the Melbourne Cup winning trainer’s base for their Ballarat Cup quest.

“Cracking bloke … cracking family, Anthony’s wife Kylee is a one in a million and I’m not just saying that because I’m staying here,” Thomas said.

“Anthony’s gone out of his way to help me since I got down here and even now that we’re racing each other he’s been working with my dog more than his own.

“Seriously how many blokes you know would do that?

“But in saying that they have been stitching me up with practical jokes every few days and the get square is coming. I need to make the final and be here for another week so I can come up with something.”

The final heat will see Topgun winner and Melbourne Cup finalist Get It Gizmo start favourite ahead of Jeff Britton’s exciting prospect Mepunga Wonder in what promises to be a gripping clash.

Away from that pair, betting has Healesville Cup winner Myrniong And All next in line at $5.50, the noted front runner expected to give his more fancied rivals plenty to catch early doors.